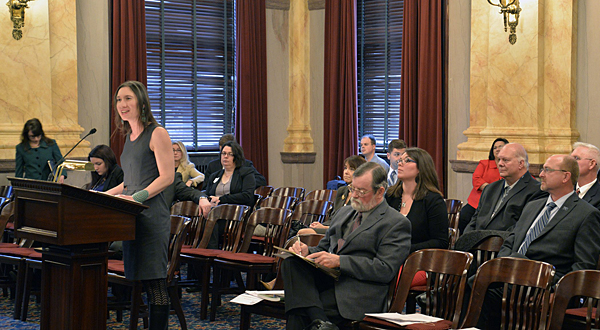 COLUMBUS, Ohio — Ohio Farm Bureau members recently made their case for property tax relief during testimony before the Ohio Senate Ways and Means Committee. In addition, Farm Bureau leaders met with Ohio House members as the representatives continue to explore pathways forward for CAUV reform. Farm Bureau is seeking changes to the state’s Current Agricultural Use Value formula, which in recent years has threatened the viability of family farms.

Ohio farmers saw a 307 percent increase in property taxes between 2008 and 2014. Those higher taxes are now being paid at a time when some farm crop prices have fallen as much as 50 percent.

“For those of you who have worked in small business, ask yourselves if you would be able to manage a tax increase of 300 percent. It’s not an easy thing to budget for,”
Farm Bureau State Trustee Mike Bensman told lawmakers in testimony before the Senate Ways and Means Committee. Bensman and his brothers are the fourth generation to farm in Shelby County where they currently operate 4,000 acres of crops.

Katherine Harrison owns a small livestock farm in southeastern Franklin County and also is a Farm Bureau state trustee. She recently repurchased a portion of the family farm where she will be the fifth generation to work the land.

The Farm Bureau leaders testified on Senate Bill 36, which would remove incorrect assumptions in the CAUV calculation formula and make the formula less affected by non-farm factors. The bill would also remove a disincentive for farmers to adopt practices that protect water quality.

The hearing took place when nearly 300 Farm Bureau members were in Columbus for their annual legislative visits. In meetings in lawmakers’ offices, the farmers shared their personal stories about the tremendous burden being felt by family farmers throughout Ohio and asked for their help in reforming CAUV.

“CAUV has become the absolute No. 1 issue for our members,” Bensman said.

“Farmers are deeply vested in and play a vital role in our community,” Harrison added. “Part of the responsibility of being a steward of the land, is paying appropriate levels of taxation. But the current tax situation creates pressures that make it more difficult for small farms to remain.”