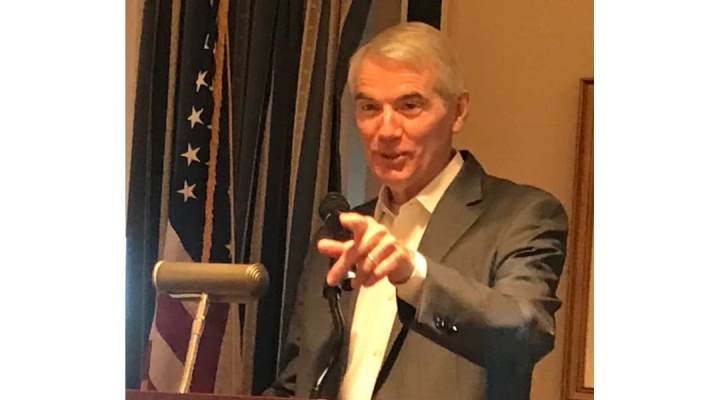 As Ohio Farm Bureau members met with their representatives in Washington, D.C. last week, a hot topic was an impending railway strike set for midnight Sept. 16, which had the potential of throwing an already stressed supply chain into chaos. Here, U.S. Sen. Rob Portman (R-Ohio) speaks with OFBF members about the possible rail strike and other issues. (Kyle Sharp, Morning Ag Clips)

COLUMBUS, Ohio — As Ohio Farm Bureau members met with their representatives in Washington, D.C. last week, a hot topic was an impending railway strike set for midnight Sept. 16, which had the potential of throwing an already stressed supply chain into chaos as trains hauling agriculture goods and more would have come to a complete halt.

“You don’t have to visit many cooperatives, elevators and agriculture retailers to realize how important rail is to Ohio agriculture and our members,” said Brandon Kern, senior director of state and national policy for Ohio Farm Bureau. “Our message to lawmakers this week was to keep the trains moving and not to put more pressure on an already bogged down supply chain.”

A tentative agreement brokered by the Biden administration between railway companies and railroad unions was reached in the wee hours Thursday morning, seeming to avert what would have been a $2 billion “hit to our economy right away,” according to U.S. Sen. Rob Portman, who spoke to Farm Bureau members. “This is a serious economic issue and huge to our economy, not just to Ohio, but around the country.”

Farm Bureau members and leadership urged Congress to act immediately if necessary to keep commerce open, and several legislators appeared prepared to do so.

“An extended rail strike would have cascading effects on farmers and ranchers, and the best solution for agriculture and the U.S. economy is to avoid a strike entirely,” said American Farm Bureau President Zippy Duvall. “We hope workers and management come to an agreement immediately and keep trains moving. If not, AFBF urges Congress to prepare to intervene, if necessary, to prevent a rail stoppage of any duration.”

During a Thursday morning breakfast, U.S. Sen. Sherrod Brown spoke to Farm Bureau members in Washington, D.C. and expressed optimism regarding the tentative agreement reached by the unions and railroad companies.

“A strike would have been just a disaster for all of us – for farms, for industry,” Brown said. “The biggest fight was over sick days. I think that’s been reconciled to the general satisfaction of both sides. So I think the news is good.”