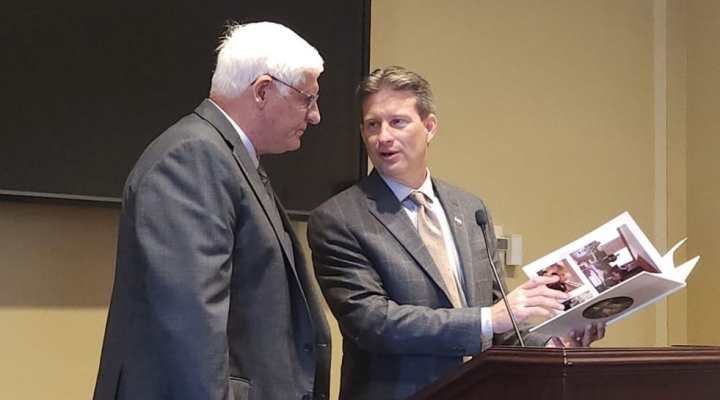 Congressman Bob Gibbs, who is retiring after his term ends this year, receives a commemorative keepsake from Ohio Farm Bureau Executive Vice President Adam Sharp during the Farm Forum in Washington, D.C., on Sept. 14. (OFBF Photo)

Over three days, participants heard from experts and in turn voiced their thoughts on topics including the 2023 Farm Bill, environmental regulations, energy and economic policies. This was an opportunity for members to help legislators make the connection between what is happening on Ohio farms and what is being debated in the halls of Congress and within federal agencies.

Tuesday marked the start of the 2022 Washington D.C. Leadership Experience. For the second year, this trip to the nation’s capital included county Farm Bureau presidents and vice presidents along with Ohio Farm Bureau Young Ag Professionals and members of the AgriPOWER Class XIII leadership institute. The groups are joining forces to visit face-to-face with lawmakers about issues being taken up inside the beltway that could have major implications to Farm Bureau members across Ohio.

“To have over 100 Ohio Farm Bureau members, all diverse in their roles in Ohio agriculture, come together to meet with legislators in Washington, D.C., is what our organization is all about,” said Ohio Farm Bureau President Bill Patterson. “We have a lot to discuss as we visit The Hill this week and we look forward to making our voices heard here on behalf of all of our members back home.”

In preparation for in-person visits with lawmakers, participants were briefed about the topics that will be covered during Hill visits this week, including the 2023 Farm Bill, operational cost associated with inflation and supply chain breakdowns, climate change and impacts of EPA limiting agriculture technology approvals.

The keynote speaker was Dr. Venus Welch-White with the U.S. Environmental Protection Agency’s Agriculture Advisor’s Office, who shared an update on WOTUS, along with her agency’s vision to meet the Endangered Species Act deliverables, improve the program’s efficiencies and engage with stakeholders to make regulations that are rooted in science and will have a minimal impact on agriculture.

The 2022 Washington D.C. Leadership Experience once again allows participants to hear from Ohio’s two U.S. Senators. Wednesday began with remarks from Se. Rob Portman, who visited with Ohio Farm Bureau members over breakfast at The Capitol Hill Club. Sen. Portman talked about the possibility of a rail strike, the importance of rail to agriculture and Congress’ need to step in to prevent the stoppage of rail service throughout the country.

“You are all here in town at a very interesting time,” Portman said. “My view is that if there can be something worked out that brings all of the rail unions on board, great. If not, we ought to go ahead and pass legislation and I hope nobody will block it. This is not a political game, this is a serious economical issue.”

After breakfast, participants made their way to The Hill to visit with their representatives and then enjoyed the Farm Forum. This event was hosted by Congressman Bob Gibbs and Congressman Troy Balderson, as they invited other lawmakers from Ohio and across the country to visit with Ohio Farm Bureau members about where issues that concern agriculture currently are in the legislative process.

Portman and Gibbs, who will both be retiring after their terms are up, were presented with photo books from Ohio Farm Bureau titled “A Lifetime Friend of Agriculture”, to commemorate the great relationship they have had with Farm Bureau members over their careers of public service.

The final day of the 2022 Washington Leadership Experience began with breakfast with Sen. Sherrod Brown. Sen. Brown has begun hosting Farm Bill roundtables throughout Ohio as he and his Senate Agriculture Committee colleagues begin to work on new farm law over the next year.

Sen. Brown talked about what he is hearing from Ohio Farm Bureau members and their concerns as related to the upcoming Farm Bill.

“Inflation and input costs are the most important things to them now, but they are increasingly interested in how they enroll in conservation programs and making sure those programs are at least neutral, maybe a bit of a money maker for farmers,” Brown said. “They recognize that most of these cost increases are international and the farm bill can’t obviously answer all of that, but the finite things that we can do we’ve got to do.”

Ohio Farm Bureau leaders also heard from administrators from USDA’s Farm Service and Risk Management Agencies about the Federal Crop Insurance Program and the first round of climate-smart grants that was rolled out this week.

Participants were also able to tour the headquarters of the American Farm Bureau Federation before heading home, wrapping up another successful trip to Washington D.C.

Editor’s Note: A tentative deal has been reached between rail carriers and labor unions that has averted a strike.