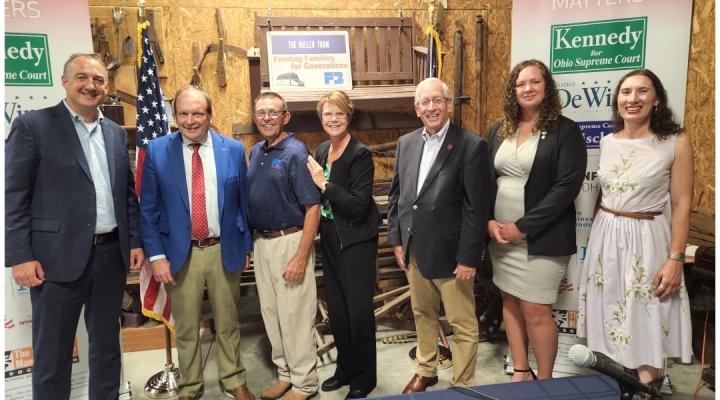 COLUMBUS, Ohio — On June 30, Ohio Farm Bureau was part of a group of Ohio’s largest business organizations that visited Miller Family Farm to announce their endorsement of Sharon Kennedy for chief justice of the Ohio Supreme Court and Pat DeWine and Pat Fischer for re-election to the Ohio Supreme Court.

During the event, Ohio’s business community, including Ohio Farm Bureau, NFIB, Ohio Business Roundtable, Ohio Chamber of Commerce and Ohio Manufacturers’ Association stressed how it relies on a predictable and consistent Supreme Court, as it allows companies, both small and large, to plan and grow for the future. According to the groups, Justices Kennedy, DeWine and Fischer are the candidates the business community believes Ohio needs to protect the Supreme Court from judicial activism that leads to unpredictability, and if any one of these candidates is not protected, Ohio will be in grave danger of damaging its national economic competitiveness.

“In a time of so much uncertainty in our agricultural markets, our supply chains and food channels, Ohio’s agriculture community needs a consistent Ohio Supreme Court,” said Ohio Farm Bureau Executive Vice President Adam Sharp. “Ohio Farm Bureau’s Agriculture for Good Government PAC is proud to support Justices DeWine and Fischer in their re-election efforts and Justice Kennedy in her candidacy for chief justice as they have a strong record of ruling in support of private property rights and a rational regulatory environment, while maintaining a stable and predictable judicial system.”

The groups say the 2022 election cycle in Ohio is shaping up to be a pivotal one, and now, more than ever, the Ohio business community must be engaged and share just how important the Ohio Supreme Court is to the economic environment in Ohio.

Justice Kennedy talked about the importance of having the support of Ohio Farm Bureau and Ohio’s business community.

“Think about all of the things that the court could consider like taxes, personal property rights, eminent domain,” Justice Kennedy said. “They want Justices who are going to uphold the law as it is written, not create a varying degree of outcomes depending on who is setting at those tables at the courthouse. I could not be more grateful for this support.”

Justice Fischer pointed out why Ohio Farm Bureau members should have an interest in who sits on the state’s Supreme Court.

“If you have Justices who all they want to do is reach a certain result that they personally feel is important, that’s not the law,” Justice Fischer said. “The law is the text of a contract, the text of a statute or the text of the state Constitution. That is what matters because it will effect every member of agriculture’s income, costs and future.”

Justice DeWine emphasized how the upcoming election is a critical point for the Ohio Supreme Court.

“We are in a time when people feel a lot of economic uncertainty,” DeWine said. “The last thing we need is an Ohio Supreme Court that adds to that by being unstable and unpredictable.

Ohio Farm Bureau’s mission is working together for Ohio farmers to advance agriculture and strengthen our communities. Learn more at ohiofarmbureau.org.