Home » Of cattle, camels and college 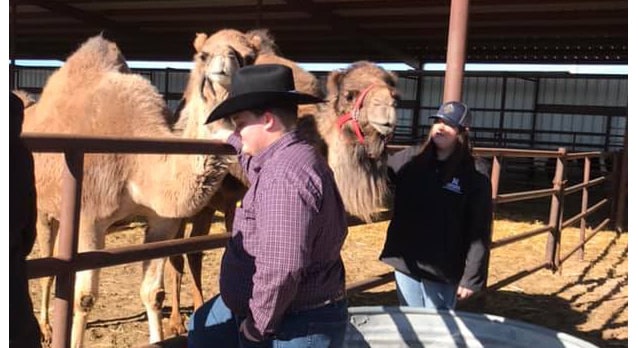 CURTIS, Neb. — An array of interesting conversations can result when cattle and camels are used in the same sentence.

Our Aggie students expect to learn about the cattle industry when they enroll for animal science classes at the Nebraska College of Technical Agriculture. But camels?

And, even more interesting a camel dairy?

Last week, NCTA had students majoring in animal science or agribusiness who traveled to Colorado for the National Western Stock Show. For some, it was their first experience in going to Denver for the expansive indoor-outdoor show, now in its 70th year.

“I’d always wanted to go but I never had the opportunity to attend since I live so far away,” said Karlee Hawkins of Durham, California.

Hawkins is a first-year Aggie on the NCTA Livestock Judging Team. NCTA students were invited as volunteer assistants helping to prepare or exhibit livestock for the Collegiate Livestock Judging Contest on Jan. 13-14.

“I hope that we are able to go for longer next year and be competing as a team in the collegiate contest,” Hawkins says. “It was really cool to be behind the scenes and see all of the work put forth by the people who provided their animals for show.”

Livestock judging teams from two-year colleges and four-year universities compete in the national contest. This semester, the NCTA team is comprised primarily of first-year Aggies, so they went to Denver to assist with livestock and absorb the experience.

Eight Aggies prepped goats and sheep Thursday morning and into the afternoon. Friday was the carload judging day for bulls, breeding heifers and pens of feedlot steers.

Aggie sophomore Clayton Runkle of Richfield, Kansas, was on the judging team 2020-21 so was familiar with the contest up on “The Hill.” This was the first year that the collegiate contest included the carload livestock down in the stockyards.

“We got goats and sheep ready starting at 5 a.m. the first day,” said Runkle, a veteran of livestock programs. “We washed, clipped on some, shined them up and got them ready for the contest. On the second day, I really liked walking the haltered bulls and heifers into the ring and seeing the quality of animals in Denver.”

“Interacting with the producers, looking at their cattle, and seeing their interest in us livestock judgers was a highlight. My passion is cattle,” says Hipke, who’s been in the 4-H cattle showring since she was eight.

Agribusiness major James Lee of Sutherland said he enjoyed seeing the livestock at the National Western. But he missed the aura of the old stockyards, overhead catwalks. and atmosphere around the pens in the lower yards.

A massive plan to renovate the NWSS site, constructing new buildings and facilities is to be completed in 2024.

But the bigger surprise for his Ag Business Club field trip, was touring the Camelot Camel Dairy at Wray, Colorado. It is owned and operated by NCTA alumnus Kyle Hendrix and his wife, Holly.

Kyle Hendrix “did a lot of outside-the-box thinking” by adding camel production to the traditional dairy and goat dairy. He raises camels for milk production.

“I’d never seen anything like this before,” said Lee, president of the Ag Business Club and an entrepreneur with his brother in their welding business near Sutherland. “I would have never thought about milking camels for commercial dairy production. I’m a cattle guy.”

Hendrix says they’ve seen health benefits in providing small amounts of camel milk to the diets of children and adults. A pint of camel milk retails for $14-15.

“They milk the camels, process the milk right there, and ship direct from the farm and to the customer,” Lee said. “It was really fascinating to learn about their venture.”

A camel has a 13-month gestation, Lee said, with newborns to arrive in a few weeks. Since the soon-to-be mothers are dry (not producing milk) yet, Lee says he would like to return and actually see the process.

During milking, the camel calf helps in the process with nursing on one side of the udder and stimulating let-down of the milk so Hendrix can milk from the other side.

“It’s definitely a different process than what we are used to in a milking parlor with dairy cows,” Lee said.

Educational experiences and conversations at college continue now, during week #2 of the spring semester. Stay tuned for updates and unique adventures from the NCTA campus!

Part of the University of Nebraska system, the Nebraska College of Technical Agriculture is a two-year institution with a statewide mission of preparing students for successful careers in agriculture, veterinary technology and related industries. NCTA is known for its affordable tuition, high job-placement rate for its graduates, and for the success of student teams in competitive activities including crops judging, ranch horse events, livestock judging, shotgun sports, stock dog trials, and intercollegiate rodeo. The college is consistently ranked as one of the best two-year schools in the nation.