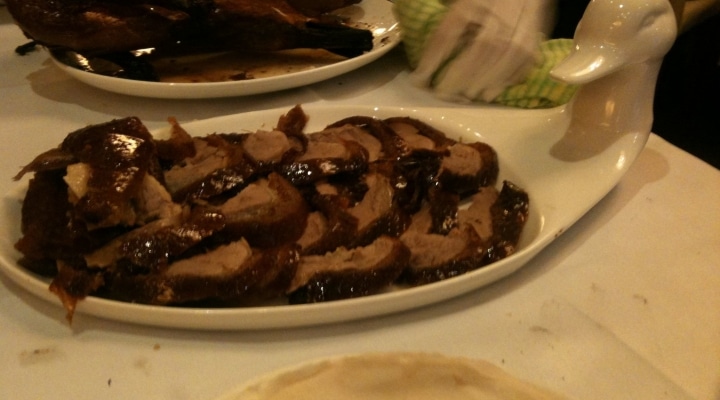 When Kaylee Kishbaugh arrived at Penn State four years ago, she didn’t even know what prosciutto was, let alone that it could be made from duck. But now, looking back over her undergraduate experience and looking ahead to her career, she realizes the odd meat product was pivotal for her. (photo by Paul Keller, Creative Commons/flickr.com)

UNIVERSITY PARK, Pa. — When Kaylee Kishbaugh arrived at Penn State four years ago, she didn’t even know what prosciutto was, let alone that it could be made from duck. But now, looking back over her undergraduate experience and looking ahead to her career, she realizes the odd meat product was pivotal for her.

Because the animal science major, who graduates this month, was enrolled in the Schreyer Honors College, she was required to take on a project and develop a thesis. After consulting with Jonathan Campbell, associate professor of animal science, about food safety research unfolding in his laboratory, the Shickshinny native decided to join his research group.

Her resulting project, “Evaluation of the Safety of Duck Prosciutto,” won the University’s award in 2019 for the best undergraduate research project and helped her land a good job with giant agriculture company Cargill, starting this spring.

“I was a typical animal science student when I first started college, and I thought that I wanted to go to veterinary school,” Kishbaugh said. “But near the end of my sophomore year, I decided that I wasn’t going that route and I wanted to conduct some kind of research in meat science that will further my career down the road. So, I asked about faculty who were working in that area, and I was directed to Dr. Campbell.”

At the time, Campbell’s lab in the College of Agricultural Sciences was working with two companies that were interested in making uncooked, dry-cure, ready-to-eat products from duck breasts. Custom meats made from duck are a niche product growing in popularity. The companies wanted to learn whether the traditional charcuterie and salumi processes used to cure the meat adequately killed pathogens.

“Ham connoisseurs would say this is blasphemy, to create a product out of waterfowl — a duck breast — versus a pork leg,” Campbell said. “But the neat thing for artisanal meat processors — those folks who like to create ‘old-world’ or niche-style meat products — duck breast is a fantastic option. It has a very similar color to a hind leg of a pig.”

Perhaps the biggest plus for prosciutto made from duck, Campbell explained, is that it can be created in much less time than from pork. It takes from one to three years to make high-quality pork prosciutto using salumi or charcuterie methods, he said. “You can make a nice prosciutto-style duck breast product in a month or two.”

Kishbaugh’s research, however, revealed that the company’s formulation and process for making duck prosciutto needed to be improved. After inoculating duck breasts with pathogens, she measured pathogen loads throughout the curing process and found that levels of Salmonella and Campylobacter were unacceptably high. She also tested for Listeria.

“The easiest option to kill more pathogens probably was for them to change their formulation when it comes to spices, increasing the salt content, which was fairly low,” Kishbaugh said.

The thing that Campbell remembers most about working with Kishbaugh was how busy and engaged she was in all aspects of her college experience. He noted that the research project taught her time-management skills that she will employ over her career.

“It’s funny, our students who seem the busiest and don’t have time to do something like a research project like this find the time and still can be involved with clubs and other activities,” he said. “I wish more undergraduates felt comfortable calling up a professor and saying, ‘Hey, can I work on a project or learn how to work in your lab?'”

Now is time for farmers to assess soybeans for proper nodulation
July 13, 2020

Now is time for farmers to assess soybeans for proper nodulation
July 13, 2020