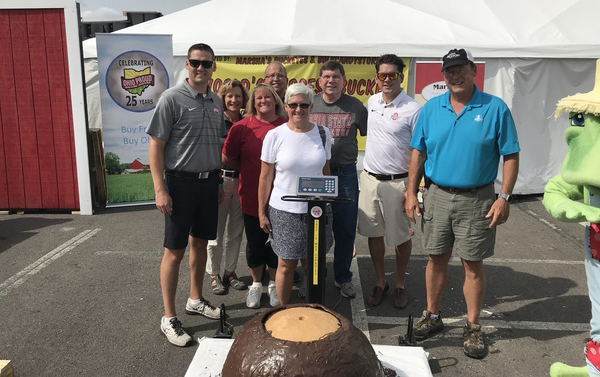 COLUMBUS, Ohio — As part of the 25th anniversary of the Ohio Department of Agriculture’s Ohio Proud Marketing Program, Weights and Measures representatives weighed the world’s largest piece of buckeye candy at the Ohio State Fair. The buckeye officially tipped the scales at 339 pounds, defeating the previous record of 271 pounds.

Ohio Proud Partner Marsha’s Homemade Buckeyes from Perrysburg baked the buckeye on display in the Bulk Candy tent at the Ohio State Fair.

“We’re thrilled to be marking the 25th anniversary of our Ohio Proud Program and what better way to celebrate than at the State Fair with an Ohio Proud partner and buckeyes,” said David Daniels, director of the Ohio Department of Agriculture.

“Our family-owned company is so proud to have made the world record sized buckeye,” said Matthew Smith, executive vice president of Marsha’s Buckeyes. “As an Ohio Proud company, we’re honored to make history at the Ohio State Fair.”

Marsha’s will now look to certify the buckeye to be included in the Guinness Book of World Records. The scale used for weighing was provided by Mettler Toledo.