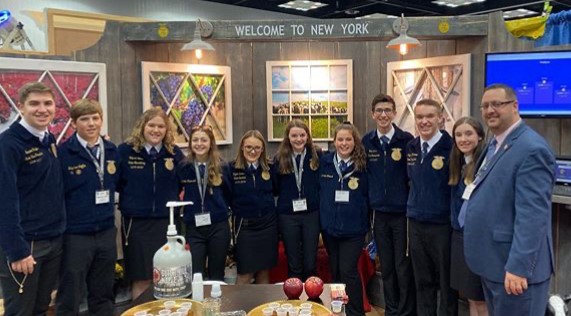 Our members did outstanding jobs at National Conventions from representing New York in Career Development Events or Leadership Development Events to National Proficiency Awards, achieving the highest degree possible (American Degree) or having a booth to show off the state. (Courtesy Photo)

ITHACA, N.Y. — The month of October flew by in a whirlwind of activity for FFA members across New York. State Officer Tour, chapter visits, and the 92nd National FFA Convention all graced the calendars of agriculture students.

State Officer Tour kicked off the month. For a week at the end of September into October the state officers and the National Officer Candidate, Kim Doyle, traveled across the state making 17 stops and interacting with over 30 FFA chapters! During this week, the students that attended were able to participate in workshops titled, ‘Be Professional but Not Boring’, ‘Take the Next Step’, and ‘Chartering Our Course to a Successful Speech’. Three schools, Oakfield-Alabama FFA, Waterville FFA, and Berne-Knox-Westerlo FFA, hosted a regional event, allowing even more chapters to participate in the activities. In addition to chapter visits, the state officers had the opportunity to tour the Great Lakes Cheese Factory in Adams, NY. This private tour showed the whole process of how cheese is made and provided insight to what happens to agricultural products after they have left the farm. 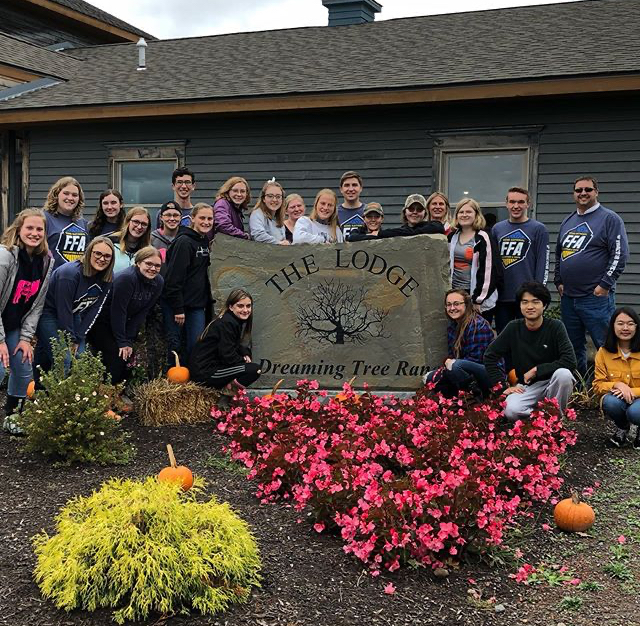 While visiting Canton FFA members, we were fortunate enough to be able to help at The Lodge at Dreaming Tree Ranch which is a ranch dedicated in the memory of FFA member, Sami Curtis. Once completed with renovations the ranch will be a get-away lodge for cancer patients and their families. A huge thank you to all the FFA chapters that so graciously invited the state officers to visit.

The month of October also brought along several chapter visits and exciting opportunities. Four state officers traveled to Goshen, NY on October 23rd to meet with the Orange-Ulster BOCES FFA chapter. Over 150 students participated in activities that day! On October 9th, the Oneida-Herkimer-Madison BOCES hosted State FFA Sentinel, Taylor Rollins, and District 5 President, Becca Ax, for a day of workshops and interacting with FFA members. The chapter also elected their new chapter officers on that day! The Saint Lawrence County FFA Leadership Conference was held in Syracuse on October 17th. Brandon Phelps, the State FFA Vice President, attended and participated in activities and workshops with the students. This large conference was a great experience for all FFA members in Saint Lawrence County!

The National FFA Convention in Indianapolis, Indiana, is the pinnacle of the year and rounds out the month. This year, there was much to celebrate at National Convention. 2019 is the 50 Year Anniversary of women being allowed membership into the National FFA Organization! The state officers arrived early to Indianapolis to serve as National Delegates. As delegates we were able to serve as a voice for our members on six committees that ranged from Urban Agriculture to Membership Experiences. Also, during the delegate session, we were able to make history and pass a constitutional amendment that has been in the process for 2 years. This amendment allows high school students in BOCES 2-year programs to receive their state degree before they graduate. Passing this amendment was a highlight of National Convention! 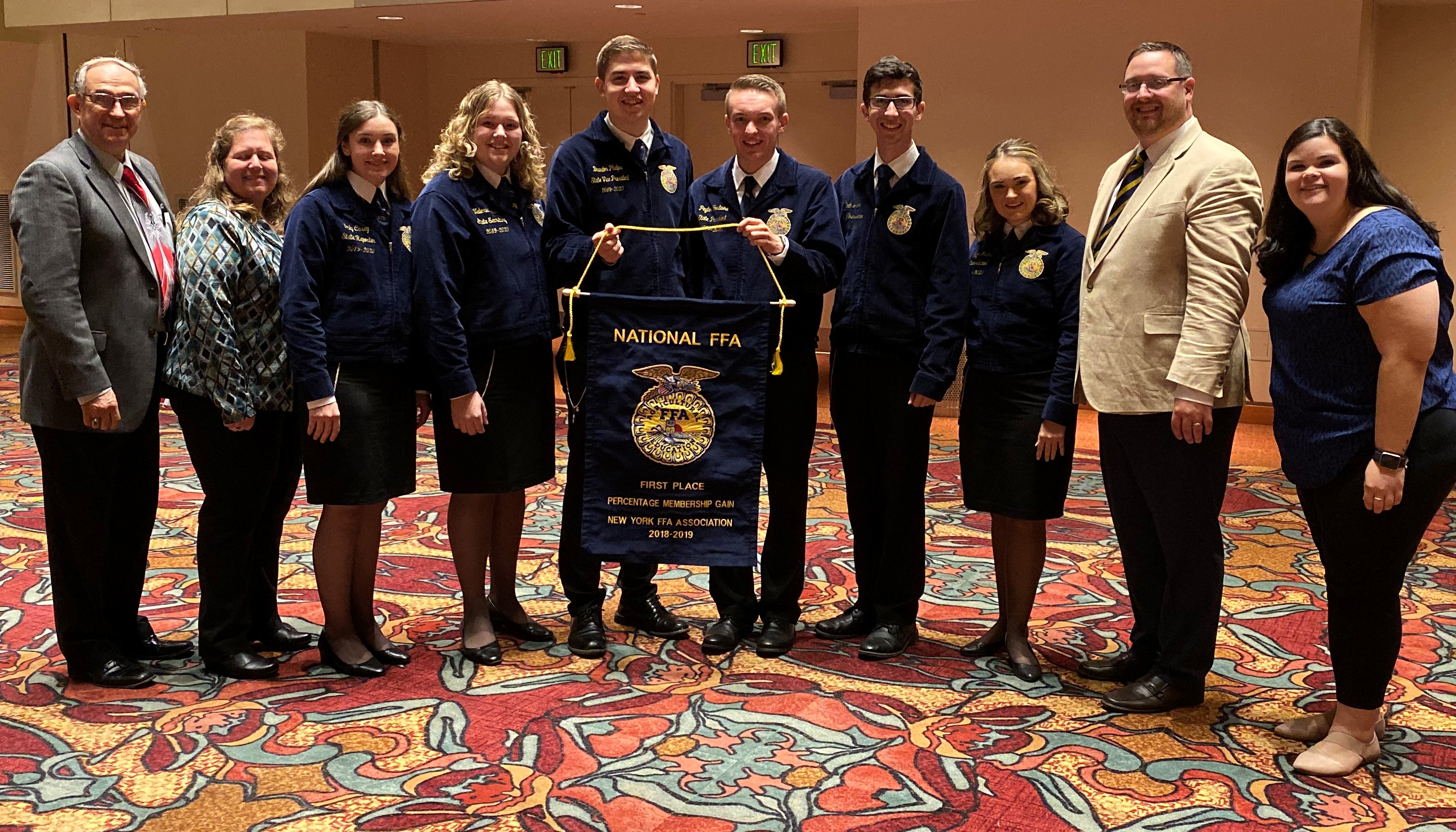 As delegates we were fortunate enough to be able to participate in the Wheeler Mission service project, sorting through donated goods to go to homeless shelters. New York State was recognized for having 100% membership and having the highest percentage growth in membership for 2018-2019 out of all 50 states and Puerto Rico and the Virgin Islands! Our members did outstanding jobs at National Conventions from representing New York in Career Development Events or Leadership Development Events to National Proficiency Awards, achieving the highest degree possible (American Degree) or having a booth to show off the state. The Tully FFA represented New York in the Hall of States with an incredible display representing New York’s vast and unique agriculture. To compete at the national level, students must first win at State Convention in May or at State Fair in August. Hannah-Rose of the Cobleskill-Richmondville FFA proudly played in the National FFA Band. Our very own past State Vice President and Stockbridge FFA member, Megan Lamb, was recognized for having an outstanding proficiency in Specialty Crops. Megan is a 3-time National Proficiency finalist. New York was also proud to have Kim Doyle represent our great state as our National Officer Candidate. Kim did an incredible job and we are very proud of her. 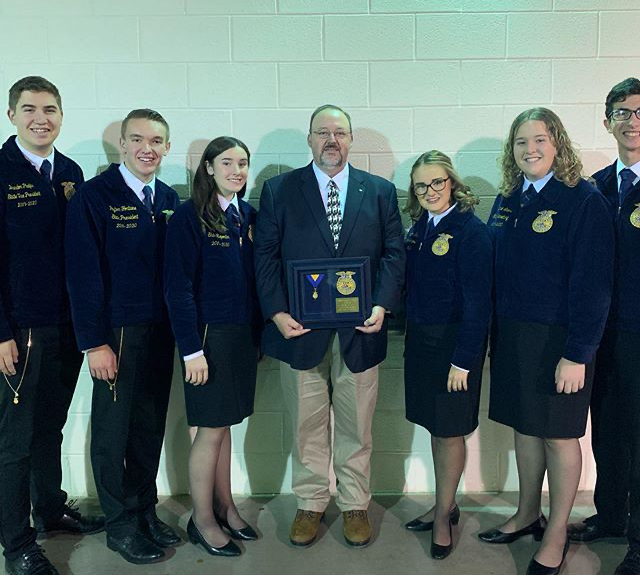 New York FFA’s supporters were also recognized for all that they do. Mr. Rick Welsh was awarded an Honorary FFA American Degree, a recognition given to our outstanding supporters. Mr. Welsh has been an active supporter of New York FFA for years and even organizes a Nationals tour bus trip for chapters across the state. New York has a very strong alumni association, one that was recognized as the Eastern Region’s Outstanding FFA Alumni Association! Our association grows stronger because we have people like Mr. Welsh and the alumni chapter supporting us. Other opportunities to participate in at National Convention included sessions with the National Officers, two concerts, a rodeo, an expo hall with over 600 college and industry representatives, workshops, and so much more were available for everyone to participate in while in Indianapolis. The week of Nationals was rounded off when 36 of our FFA members achieved the highest degree possible: the American FFA Degree. Only 1% of all FFA members are able to accomplish this. This is a huge honor and we are so proud of all the time and dedication it took our students to receive this prestigious degree!

The month of October was one for the books and we hope that we can continue seeing our students succeed as we approach the end of 2019!

FFA makes a positive difference in the lives of students by developing their potential for premier leadership, personal growth, and career success through agriculture education. For more information regarding FFA, please visit either www.nysffa.org or www.ffa.org.