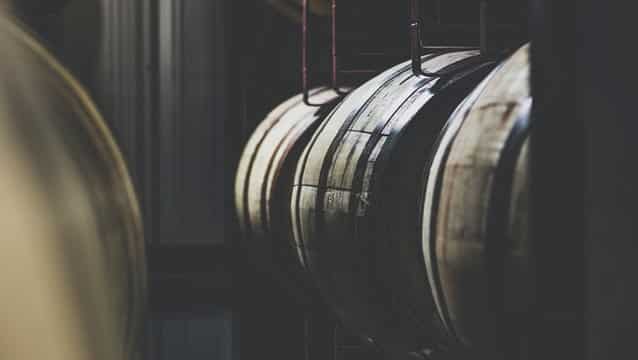 Oak barrels are often used during the aging of wine and some spirits, including cognac, rum and whiskey. (Photo by Matt Hoffman on Unsplash)

WASHINGTON — Wine and spirits are complex mixtures of flavor and aroma compounds, some of which arise during aging in wooden barrels. Among other compounds, oak wood releases coumarins, but how they affect wine’s sensory properties is unclear. Now, researchers reporting in ACS’ Journal of Agricultural and Food Chemistry have detected and measured six coumarins in oak wood, wine and spirits, showing that a combination of these compounds can produce a bitter taste.

Oak barrels are often used during the aging of wine and some spirits, including cognac, rum and whiskey. Prolonged contact of the beverages with wood alters their sensory properties, and many oak compounds that contribute to color, aroma, mouthfeel and taste have been identified. Oak wood also contains coumarins — compounds produced by plants as a defense against predators. Many edible plants make coumarins, which at high doses are used as blood thinners, but the tiny amounts in most foods are not large enough to have anti-coagulant effects. Axel Marchal and colleagues wanted to determine exactly how much of these substances end up in wine and spirits, and how they contribute to the taste of these beverages.

To find out, the researchers first screened an oak wood extract for various coumarins using liquid chromatography-high-resolution mass spectrometry (LC-HRMS). They identified five coumarins already known to be present in oak wood, as well as a previously undetected one called fraxetin. In a taste test, trained sensory panelists described five of the compounds as bitter, whereas fraxetin had a slightly sour taste. The team then measured coumarin concentrations in 90 commercial red or white wines and in 28 spirits. In general, higher levels of coumarins were found in red wines, which are aged for a longer time and in newer barrels, than in white wines. Spirits showed higher levels of coumarins than wines, possibly because of longer aging and a greater alcohol content. The tiny amounts of most of the compounds were below levels that humans can taste, but when the researchers added a mixture of all six to non-oak-aged wines or spirits, sensory panelists detected a significant increase in bitter flavor. Future studies could examine ways to reduce the coumarin content of wooden barrels to produce better-tasting wines and spirits, the researchers say.

The abstract that accompanies this paper can be viewed here.

As Paul Harvey would say: Here is the rest of the story