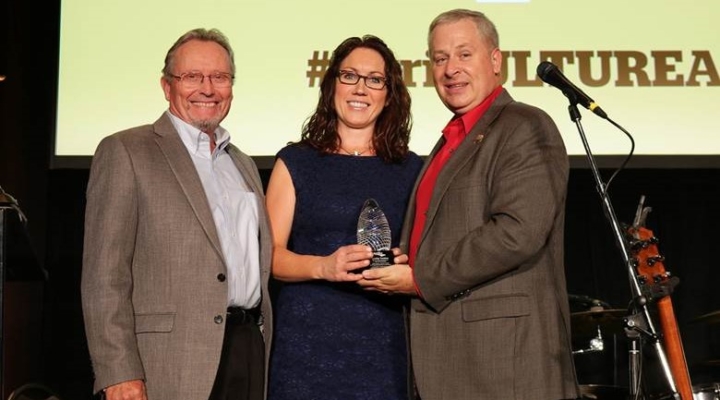 Commissioner Ball said, “Commissioner Ball said, “I want to congratulate Deputy Commissioner Trodden for this award and express appreciation on behalf of all of us at the Department for her hard work and dedication to the industry.  The energy and expertise that she brings to lead our staff and assist our food industry partners is instrumental in supporting our farms, as well as maintaining our position as a national leader in the dairy industry and in food safety.”

NASDA commended Trodden’s efforts, on behalf of Commissioner Ball, to assist the dairy industry, including her collaboration with both state and national partners to address Canada’s dairy trade policies.  Deputy Commissioner Trodden also helped to revive the Milk Marketing Advisory Council in New York State.  The group, which includes farmers and dairy processors, works together to overcome challenges in the dairy industry and engage in solutions.

“Congratulations to our 2019 Honor Awards recipients! Our state departments of agriculture are homes to incredibly talented people who often go unrecognized in the world of public service. NASDA’s Honor Awards Program provides our members the opportunity to recognize their staff for their work on a national stage,” said NASDA President and New Mexico Secretary of Agriculture Jeff Witte.

Trodden was one of four individuals honored by the non-partisan group through its national awards this year. Other recipients include Washington State Congressman Dan Newhouse and top officials in agricultural departments in Tennessee and Colorado.

Trodden joined the Department in 2016. She leads the Divisions of Food Safety and Inspections, the Food Laboratory, and Milk Control and Dairy Services.