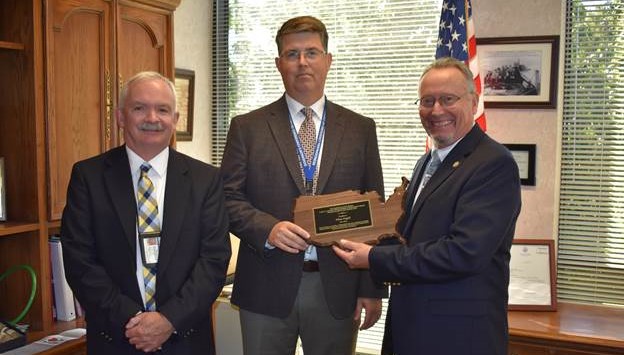 ALBANY — State Agriculture Commissioner Richard A. Ball today announced that Horticultural Inspector Ethan Angell received the Carl E. Carlson Distinguished Achievement Award in Regulatory Plant Inspection at the 93rd National Plant Board meeting in Kalispell, Montana. The award recognizes professionals who have distinguished themselves in the field for their work on regulatory plant protection. It is given to individuals who consistently uphold the principles of plant protection and quarantine, as well as the ideals of the National Plant Board, in order to serve the public.

Commissioner Ball said, “Ethan brings vast knowledge and expertise to the Department and his dedication is an asset to the public as well as our private industry partners. He has a long track record of going above and beyond the requirements of his position. The hard work that he puts into protecting plant species, crops, and wood products across New York State help us maintain and grow our crops and preserve the natural landscapes that all New Yorkers can enjoy. I congratulate Ethan for this prestigious award and, on behalf of the Department, thank him for his expertise, knowledge, and contributions to agriculture.”

Mr. Angell joined the Department in June 2004. He supervises six staff members and works to manage, contain, and eradicate invasive plant pests, which can pose a threat to farms, nurseries, and forests, all of which are critical to the economy in New York. Mr. Angell oversees a region that includes the Adirondacks, the Catskills, the Hudson Valley, Mohawk Valley, and the Capital Region. He is an expert on the Spotted Lanternfly invasive species and has overseen three major plant pest programs – the Emerald Ash Borer, the Sirex Woodwasp, and, most recently, the Spotted Lanternfly. His work includes cooperation with federal authorities as well as several state agencies, from emergency response to invasive species. Mr. Angell has been part of the team that was the first to capture the Sirex Woodwasp in North America.

Plant Industry Director Christopher Logue said, “We congratulate Ethan on this award, which recognizes his commitment, expertise, and achievements.  He is a valuable member of our team in the Division of Plant Industry and is a true asset to New York State’s agricultural industry.”