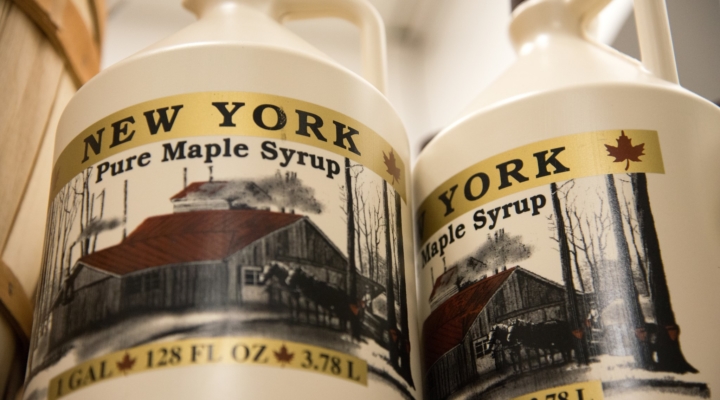 According to the USDA's National Agricultural Statistics Service, New York's maple production constituted about 19 percent of the national total. The number of maple taps also continues to climb, with more than 2.73 million taps in production in 2018, the highest number of taps since 1943. New York producers also benefited from a long season in 2018 which lasted 52 days, compared to 43 days in 2017. (Rich Roberts, Flickr/Creative Commons)

ALBANY — Governor Andrew M. Cuomo today announced that New York’s maple industry hit a 74-year record in 2018 with the production of 806,000 gallons of maple syrup. The maple industry in New York has grown by nearly 50 percent in the last five years and continues to maintain the state’s standing as the second leading producer of fresh maple syrup in the nation.

“The maple industry is one of New York’s most important agricultural sectors, and it continues to grow year-over-year, infusing millions into the economy and bringing New York national recognition for its quality,” Governor Cuomo said. “The growth of the industry is an indicator of our fantastic producers, who work hard to make some of the best maple syrup in the country and the innovative and unique maple products that consumers are demanding.”

“It is always a highlight of spring to visit farms across the state and celebrate Maple Weekend,” said Lieutenant Governor Kathy Hochul. “I have seen firsthand how farmers are contributing to our maple industry and continuing to increase production in New York. We’re proud that New York is second in the nation for maple syrup production, creating jobs and growing the economy. We will continue to invest and grow the industry to ensure continued success.”

According to the USDA’s National Agricultural Statistics Service, New York’s maple production constituted about 19 percent of the national total. The number of maple taps also continues to climb, with more than 2.73 million taps in production in 2018, the highest number of taps since 1943. New York producers also benefited from a long season in 2018 which lasted 52 days, compared to 43 days in 2017.

In celebration of New York’s growing maple industry, the New York State Fair will hold its first-ever Maple Day on Monday, August 27. Maple Day is sponsored by the New York State Maple Producers Association and will feature maple products, such as maple cotton candy, maple donuts, pancakes with maple syrup, and more, that can be sampled at locations across the Fairgrounds. Cooking demonstrations using pure New York maple syrup will be held throughout the day in the Wegmans Demonstration Kitchen and maple vendors will be sampling and selling products at the Taste NY Marketplace in the Horticulture Building. Maple Day joins Dairy Day, Beef Day, and Agricultural Career Day in a lineup of special days created at the fair to highlight and promote New York State agriculture.

New York State Grown & Certified promotes New York’s agricultural producers and growers who adhere to food safety and environmental sustainability standards. For maple, the syrup must be sourced from New York maple trees and processed in New York State. To meet the food safety standards, participants must have successfully completed a maple food safety class, developed in partnership between Cornell Cooperative Extension and the Western New York Maple Producers Association, and must follow food safety best practices that are subject to an onsite audit.

In addition, the maple producer must participate in an environmental management program that promotes sustainability and keeps forests healthy and productive, such as the New York State Agricultural Environmental Management program, which is administered through the Soil and Water Conservation Districts, or the Certified Tree Farmer, administered by the American Tree Farm System.

State Agriculture Commissioner Ball said, “Maple is agriculture’s first crop of the season and its certainly one that we do extremely well here in New York.  Thanks to our dedicated maple producers, more of whom are joining the NYS Grown & Certified program, New York continues to be a top producer in the country, with record production figures and number of taps in recent history. We are pleased to promote the industry through Grown & Certified and at the State Fair, where more than 1.1 million people will get to taste some of the very best maple syrup and maple products in the country.”

Acting State Fair Director Troy Waffner said, “We’re excited to showcase our maple producers at the Great New York State Fair this year.  Maple is a great addition to just about everything—from ice cream to sausage—and as one of New York’s highest-ranking commodities, it’s a special treat that every New Yorker and every visitor should have a chance to try.”

Executive Director of the New York State Maple Producers Association Helen Thomas said, “The Fair is a great opportunity to introduce new maple products of New York to fairgoers and consumers.  We are pleased to unveil newly-developed Hoffmann’s Maple Sausage Snappy and Cornell University’s maple milk, which both use pure New York maple syrup.  Free samples will be available in the Dairy Products building, the Dairy Birthing Center, and Horticulture Building.”

Producers interested in learning more about how to become New York State Grown & Certified and how to qualify can contact the Department of Agriculture and Markets at (800) 554-4501 or email NYSGrownAndCertified@agriculture.ny.gov.