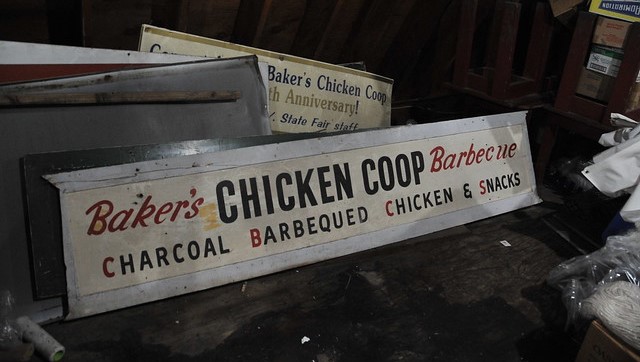 Dr. Robert Baker and his wife opened Baker’s Chicken Coop in 1949 in a tent that would occasionally be knocked down by a wandering pig. (Courtesy Photo, New York State Fair)

SYRACUSE, N.Y. — In 1999, President Bill Clinton and First Lady Hillary Rodham Clinton toured the Great New York State Fair. They stopped at one of the Fair’s food stands and were presented with a basket of New York apples. “These apples look good,” said the President. “But where’s the chicken?”

Even the leader of the free world knows where great barbecued chicken can be found: At Baker’s Chicken Coop on Restaurant Row. The stand that spread the gospel of Cornell Barbecued Chicken around the world turns 70 this year, run by the daughter of its founder and the woman who handed Clinton the basket of apples, Reenie Baker-Sandsted.

“It made my Dad so happy,” Baker-Sandsted says of the restaurant. “He really, really loved seeing the chicken barbecue successful because it made him feel good.”

Dr. Robert Baker grew up in Sodus, Wayne County and got his bachelor’s degree from Cornell. He earned advanced degrees at Penn State and Purdue. He came up with the chicken barbecue idea at Penn State to meet a mandate to serve something special to the Governor, but it didn’t become public until he returned to Cornell to teach. He was told the poultry industry needed ideas to help sell more chicken. He had just the thing.

Baker and his wife opened Baker’s Chicken Coop in 1949 in a tent that would occasionally be knocked down by a wandering pig. “Dad used to tell us there were only three places to eat at the Fair then,” Baker-Sandsted said. There are many more food stands at the Fair these days. Despite that, the stand turns out an average of 900 halves of chicken each day.

Cornell Barbecued Chicken is more than a recipe. Cornell Cooperative Extension Bulletin 862 contained detailed instructions for building a proper fire pit, plans to build racks to turn large numbers of chicken halves at once, instructions on how and when to baste the birds, a diagram of a quick-moving serving line and, of course, the recipe for the sauce that defines Cornell Chicken. It’s a simple recipe — just six ingredients — but the vinegary, salty sauce produces crispy skin and drives the flavor deeper into the meat than the then-standard tomato-based sauces.

It was far from Dr. Baker’s only invention. He created the chicken nugget, figured out a better way to make breading stick to chicken, invented turkey ham and dozens of other poultry and cold cut creations. When he died in 2006, his memorial service began with a Cornell chicken barbecue.

Baker’s Chicken Coop remains a family business. Baker-Sandsted’s mother retired in 1988 and Dr. Baker stayed active with the stand until his death. Baker-Sandsted and her three sisters run the business now. They’ve been owners since the day each was born, given a share of the stand as well as an annual job. A third generation is on the job: Baker-Sandsted’s son is the chicken cooker and her daughter comes home from Haiti every summer to work the stand.

Despite rave reviews from culinary and barbecue experts, Cornell Barbecue Chicken remains a regional favorite. “You’ll find little pockets all over the United States that know what the Cornell chicken is,” said Baker-Sandsted, spread there by Dr. Baker’s graduate students. The Bakers are working on some modest plans to celebrate the 70th anniversary but the basic plan remains the same as it was in a tent in 1949: Serve the best barbecued chicken anyone’s ever eaten. On that day in 1999, the First Couple headed back to Washington with a basket of apples — and eight barbecued chicken breasts. The Bakers’ reward: a thumbs-up from the President, one of thousands they’ve received.

Learn how to become a Master Gardener