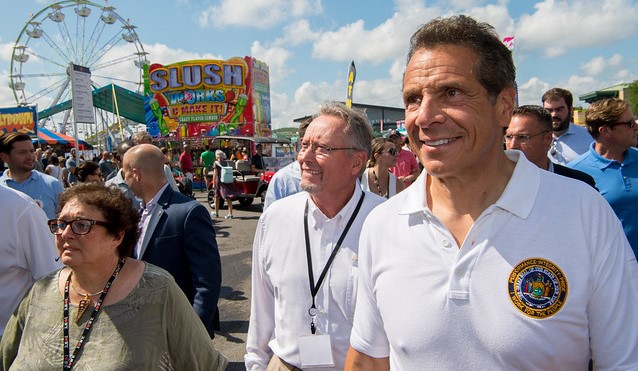 SYRACUSE, N.Y. (AP) — A New York state commissioner announced Wednesday that the state fair will be solely powered by renewable energy by 2023.

Richard Ball, commissioner for the state Department of Agriculture and Markets, made the comment in front of a crowd of hundreds as the state fair started Wednesday. He said the efforts are to create “the greenest fair in the U.S.”

Officials reported the effort involves the building of wind turbines and installation of solar panels.

Gov. Andrew Cuomo also joined Ball for the event and announced a promotion effort to push fair attendance. Officials said people with an Amtrak ticket dated between Wednesday and Sept. 2 will be given an admission to the fair for free.

The governor and staff members took an hourslong train ride to the fairgrounds on Wednesday.

“So I’m here on free admission today and I’m loving it,” he told the crowd.

Afterward he posed for selfies and strolled through the fairground, attracting a crowd as he ate sausage, shook hands with fairgoers and chatted up vendor workers.

“If you think you have gone to the state fair, think again because you have not,” he told reporters. “This is a different fair than ever before.”

Ryan Tarinelli is a corps member for Report for America, a nonprofit organization that supports local news coverage in a partnership with The Associated Press for New York. The AP is solely responsible for all content.

Ag and solar energy can be mutually beneficial
January 8, 2020