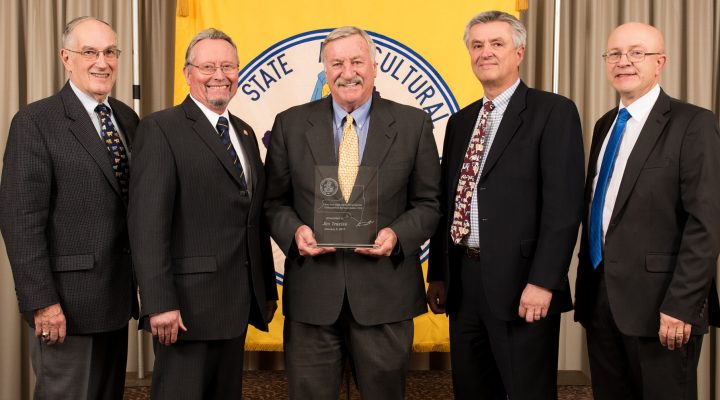 SYRACUSE, N.Y. — The NYS Agricultural Society celebrated its 185th birthday at its Annual Meeting and Forum on January 5, 2017 in Syracuse, NY. This is the largest statewide agricultural meeting that brings together all sectors of the food system to explore topics critical to the future of New York agriculture, and to recognize the unique contributions of its stakeholders. “This is the agricultural family reunion of the year,” said Richard Ball, NYS Commissioner of Agriculture and Markets, during his annual “State of the State” of Agriculture address. “2016 was a challenging year for our industry. Virtually every segment of the state was impacted by frost or draught, and dairy production exceeded demand nationally and globally. But we have a lot to be optimistic about. We have outstanding resources, one of the largest markets in the world, and economic opportunities.”

Collaboration was this year’s theme with panelists and keynote speakers providing successful models in finance, education and government that are impacting the ag and food industry in positive ways. Presented at mid-day, eight awards recognized producers, farm organizations and businesses that are leaders in their communities and specialization.

DISTINGUISHED SERVICE CITATION – Jim Tresize, retiring president of the NY Wine & Grape Foundation, received the coveted Distinguished Service Citation. For six decades, the NYS Agricultural Society has recognized individuals who have dedicated a lifetime of service, resulting in outstanding contributions to NY agriculture. The award is sponsored annually by NY Farm Bureau Member Services. Tresize has served growers and vintners in numerous posts within the state, and has an international reputation as a speaker, industry analyst and professional wine judge. “We thank Jim for his service to NYS agriculture, to Governor Andrew Cuomo, and to his father Mario during his term in office,” said Commissioner Ball. In 1985, Governor Mario Cuomo introduced legislation creating the NY Wine & Grape Foundation, which sponsors research, and conducts promotion programs in support of NY grapes, grape juice and wine. According to Trent Preszler, Foundation president, under Jim’s leadership, 59 of NY’s 62 counties have wineries; there are 20 tourism wine trails; and the industry generates $4.8 billion in economic impact. Jim will retire this March, but has plans to remain an active champion of the NYS wine industry for years to come.

AG PROMOTION AWARDS – The award recognizes individuals, groups and/or teams of partnering organizations that work to improve the community understanding of agriculture. 2017 winners include Mel Chesbro, agriculture manager of the NYS Fair, and the Finger Lakes Workforce Investment Board. The award is sponsored by Alpha Zeta Fraternity at Cornell University, American Farmland Trust, and the NYS FFA Foundation. Chesbro organizes fair competitions for livestock, wine, vegetables, fruit, honey, maple syrup, flowers, forage and grain. This includes 38,000 total entries. The Finger Lakes Workforce Investment Board, with the assistance of 60 volunteers, hosted 200 students from 14 school districts spring 2016 to build awareness of agricultural careers in the greater Geneva area.

BUSINESS OF THE YEAR – The award promotes our state’s food system by recognizing the quality, leadership and innovation demonstrated by NY farms and agribusinesses. The 2017 production category winner is Walnut Ridge Dairy, LLC of Lansing, NY. Walnut Ridge is a multi-generational, multi-family dairy operation, milking upwards of 1,400 cows. Founded in 2011, Hudson Valley Harvest of Kingston, NY – the agribusiness category winner – aggregates and distributes fruits, vegetables, proteins, and shelf-stable products from over 50 Hudson Valley farms to restaurants, grocers, and institutions throughout NY, NJ, CT and MA.

CENTURY & BICENTENNIAL FARM AWARDS – Sponsored by Farm Credit Northeast Ag Enhancement, the century and bicentennial program honors NY farms in continuous operation on the same land by the same family for 100 years or more. In 2017, farms in eastern NYS counties were recognized. A complete list can be found online at www.nysagsociety.org.

FFA CHAPTER OF THE YEAR – The 2017 winner of the FFA Chapter of the Year is Tri-Valley Central School of Grahamsville, NY. The only agriculture program and FFA in Sullivan and Ulster counties, the organization works with over 150 members in grades 6-12. Sponsored by the NYS Grange, the award recognizes a NYS FFA Chapter for service to their community and promotion of agriculture.

NEXT GENERATION FARMER AWARD – Launched in 2016, this award recognizes both a long-standing operation who is excelling under new leadership and owner/operators who are brand new to agriculture and food production. Shannon Mason, the sixth generation at Cowbella Creamery at Danforth Jersey Farm in Jefferson, NY was honored. The farm dates back to 1817. Shannon now operates the farm with family, and in 2010 created Cowbella – a farmstead creamery business, producing butter, yogurt, and bottled milk. Kyle Farms of Avon, NY was also recognized. Matt and DJ Kyle, with cousin Nate Hatch, manage a flock of 3,000 ewes for meat and wool production in Avon, NY. The Next Generation Farmer Award is sponsored by The Voss Group.

NYS FARM SAFETY AWARDS – 2017 NYS Farm Safety Award honorees include Ideal Dairy Farms of Hudson Falls, NY and Will-O-Crest Farms, LP of Clifton Springs. Both operations are large dairies which operate with the assistance of numerous employees involved with livestock, machinery and field equipment. Farm safety programs do far more than reduce injuries and downtime. Rewards often include saving lives. Cargill, Inc. is the award sponsor.
Established in 1832, the mission of the NYS Agricultural Society is to foster, promote, and improve the NYS food and agricultural industry through education, leadership development and recognition programs. It has played a vital role in the development of the NYS Department of Agriculture and Markets, Cornell University’s College of Agriculture & Life Sciences, the NYS Agricultural Experiment Station, the NYS Fair, and the Empire State Food and Agricultural Leadership Institute (LEAD NY). In 2011, the NYS Agricultural Society Foundation was formed. For more information or to join the NYS Agricultural Society visit www.nysagsociety.org or contact Executive Secretary, Ann Noble Shephard, at ann@nysagsociety.org, (315) 727-5449.

Some bats develop resistance to disease

Grandin to speak at pork meeting