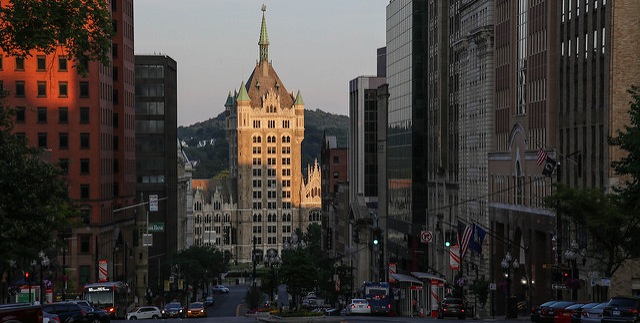 "New York Farm Bureau would like to thank all of the lawmakers on both sides of the aisle who worked closely with us this legislative session," stated David Fisher, NYFB President. (Paul Sableman, Flickr/Creative Commons)

The end of session included the passage of a number of bills that will hopefully make it easier for farms and agricultural businesses to reduce costs and market their products. This includes securing the long overdue inherent risk reform legislation for agritourism and equine operations. In addition, we saw bi-partisan support for bills that will bring parity to the craft beverage industry by allowing farm cideries to sell their products at all licensed wineries and cideries. Separate legislation would also open up farm distilleries to be able to sell New York wine, beer and cider for on-site consumption.  This is an important marketing opportunity for all craft beverage products.

Other bills that New York Farm Bureau supported include easing procurement rules for local governments and BOCES programs to purchase more local farm products, making it easier for smaller food processors to overcome the burden of obtaining a processing license, and amending the Racing Pari-Mutuel Wagering and Breeding Law to give preference to horses wholly owned by New York residents in New York races. Legislation also passed that will create a Young Farmer Advisory Board within the New York State Department of Agriculture and Markets to provide feedback on issues and barriers that concern beginning farmers.  We are hopeful that Governor Cuomo will also support these important pieces of legislation as they move to his desk for his signature.

All of this was passed in the final weeks of session and capitalized on what was a strong and productive year at the Capitol in Albany for New York Farm Bureau. The 2017-2018 New York State Budget was also positive for farmers. It included increased support for the Environmental Protection Fund, FFA programs, research and promotion. Fifty million dollars for nutrient storage for dairy farms and funding for the Farm to Food Bank Bill, a $5,000 tax credit for farms that donate local product to food banks and pantries, were also budgetary wins this year.

New York Farm Bureau would like to thank all of the lawmakers on both sides of the aisle who worked closely with us this legislative session, including the state’s Agriculture Committee Chairs, Senator Patty Ritchie and Assemblyman Bill Magee. Farming is critical for the rural economy upstate and on Long Island, and it is important that agriculture remains a priority for New Yorkers in and out of the State Capitol.”