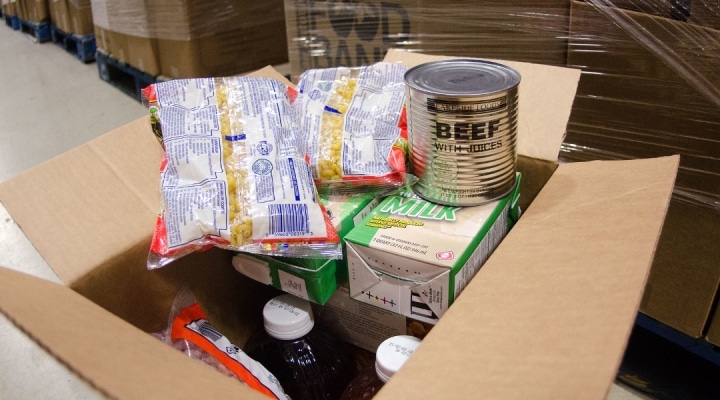 In the past 16 years of the Harvest for All Program, farms in New York have given around 114 million pounds of food to support the work by the regional food banks in our state. That translates into more than 90 million meals. (Stock photo via U.S. Department of Agriculture, Public Domain)

ALBANY — New York Farm Bureau members continued to make generous food donations during a challenging year for so many families in need. This past weekend, American Farm Bureau Federation recognized New York Farm Bureau’s Young Farmers and Ranchers (YF&R) program for its efforts to donate more than eight million pounds of food to the regional food banks across the state last year. That was the second highest donation total in the country for 2020, behind Florida.  NYFB’s YF&R program was awarded a $250 check for its efforts that will be donated to Feeding New York State.

Due to the pandemic, the normal gleaning and on-farm collection events could not be conducted. Instead, farmers worked with producers and dairy manufacturers to increase their donations as there was a surge in demand at food banks across the state. Many county Farm Bureaus collaborated with member farms, food processors, other agricultural organizations and their food banks and pantries to conduct dairy product drive-thru events to distribute the food to those in need.

The 8,028,541 pounds of food collected, about a million more pounds than in 2019, was through the “Harvest for All” donation program, a nationwide annual farm donation partnership linking Farm Bureau and Feeding America in each state. In New York, NYFB’s YF&R Committee and Feeding New York State administer the statewide donation partnership.  The food is then distributed among the 10 Feeding America food banks throughout the state.

In addition, county Farm Bureau members collected $3,500 from other members in 2020 that was donated for the purchase of milk along with a separate drive to purchase hams during the holiday season. Members also volunteered more than 700 hours of their time to gather donated dairy and produce and assist with the large food distribution sites.

Christina Kohler, New York Farm Bureau Young Farmers and Ranchers Chair, said, “New York’s farmers responded in a time of need, even when their own farms were facing significant market and pricing disruptions related to the pandemic. I am incredibly proud of our members who always step up to help people in their community and across the state.”

In the past 16 years of the Harvest for All Program, farms in New York have given around 114 million pounds of food to support the work by the regional food banks in our state. That translates into more than 90 million meals.

Dan Egan, Executive Director of Feeding New York State, said, “New York’s food banks are so grateful to our farm partners for another fantastic year. It is remarkable that in a year marked by challenging weather and dominated by a historic pandemic, New York’s farmers continued their tradition of generous giving to our neighbors in need. We could not do our jobs if farmers did not do theirs. We at Feeding New York State thank you from the bottom of our hearts. ”