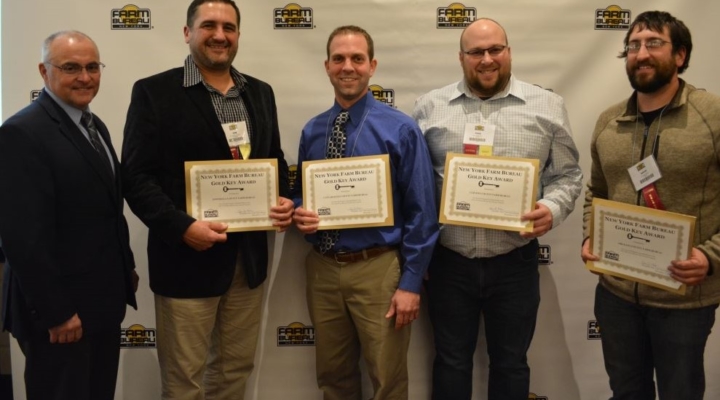 ALBANY — At its State Annual Meeting in Albany, NY, New York Farm Bureau presented a number of awards at its Tuesday night awards banquet to those members and counties that have excelled in the Farm Bureau mission to “serve and strengthen agriculture.”  The dinner, sponsored by Farm Credit East, announced awards for Young Farmers and Ranchers, Promotion and Education, and Membership.

The Young Farmers and Ranchers program handed out three awards for their annual contests. Winners of these awards will represent New York at the American Farm Bureau Annual Meeting this January in Nashville, Tennessee.  The New York Farm Bureau Discussion Meet champion is Corey Hennessey from Mattituck, NY on the east end of Long Island. The Excellence of Agriculture award was presented to Paul Molesky from Schaghticoke, NY and the 2017 Achievement Award winners are Darin and Katie Hill from Cattaraugus, NY.

The Promotion and Education Award which recognizes a county Farm Bureau’s efforts, program and creativity was given to Allegany County Farm Bureau for its “Adopt an Alpaca” program. The goal was to introduce students to Alpacas and teach them about fiber use.