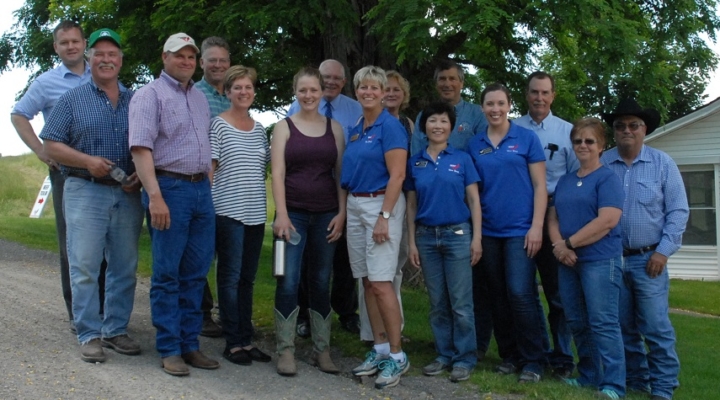 SYRACUSE, N.Y. — The New York Beef Council was honored to receive the Ag Promotion Award from the New York State Agricultural Society for their “Meat Your Beef” tours. On Jan. 4, the NYS Agriculture Society hosted the 186th Annual Meeting and Agricultural Forum where the award was presented. The Ag Promotion Award was launched in 2009 to recognize individuals and groups for their efforts to improve the understanding of agriculture in New York State.

The “Meat Your Beef” tours were first offered in 2010, the tours were developed to connect food service, retailers, educators, dieticians, government representatives and bloggers with New York beef producers to educate them about farm practices. Since the tours began, more than 28 farm tours have been conducted reaching more than 575 influencers.

In 2017, a partnership with the New York Agriculture in the Classroom program allowed for a new “pre-tour” educator’s session to be offered. A new focus was put on promoting the tours to educators and sharing beef lesson plans that could be easily incorporated in classroom curriculum. More than 40 educators attended the pre-tour sessions throughout the week.

The 2017 tours provided attendees with a broader view of the industry and opportunity to meet not only New York producers, but visiting ranchers from South Dakota.

“This was the 1st time I’ve ever been to a beef farm and it was an amazing experience,” one attendee said. “The staff from the Beef Council was friendly and the tour was very well run. I enjoyed the comparison between the New York and South Dakota farms.”

“We are honored to have received this recognition and are thankful that our partnership with the South Dakota Beef Industry Council has allowed us to offer these tours for the last seven years,” said Jean O’Toole, NYBC Executive Director. “The “Meat Your Beef” tours serve as an important opportunity to provide influencers with direct access to the evolving beef story and happenings on the farm.”

Participant surveys from the 2017 tours revealed at the beginning of the tour 62 percent of the attendees knew little or nothing about how cattle are raised, however after the tour 99 percent somewhat to strongly agreed that they could explain how beef is produced to a consumer/friend or family member. In addition, attendees had a 75 percent increase in confidence about management and prevention of animal disease and more than 60 percent increase in confidence relating to what animals eat and the sustainability of beef.

DFA honored as Dairy Processor of the Year