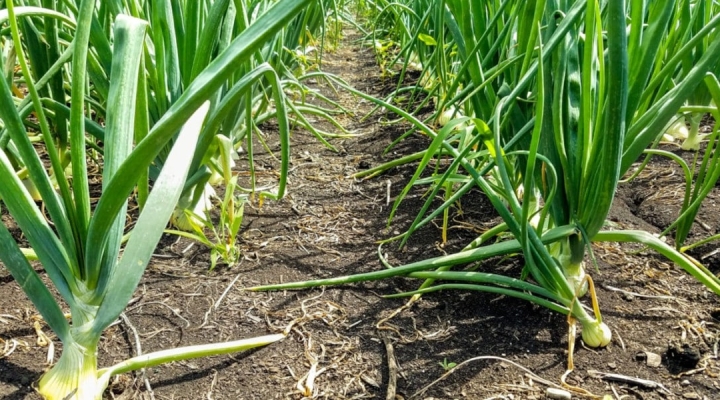 A new study showed that by following action thresholds to determine when to apply insecticides to control onion thrips, farmers made 2.3 fewer applications per season while maintaining yields and bulb size. (Photo Provided)

ITHACA, N.Y. — A surprise finding from new research on controlling pests and disease in New York commercial onion fields will enable the state’s producers to cut their use of synthetic chemicals without sacrificing yield.

The study, conducted by scientists at Cornell AgriTech and recently published in the journal Agronomy on May 28, showed that by following action thresholds to determine when to apply insecticides to control onion thrips – a major annual pest – farmers made 2.3 fewer applications per season while maintaining yields and bulb size. Action threshold is the density of the pest in a crop that requires a control measure to prevent the population from increasing to a level that will cause economic loss.

The results of more than three years of field trials also showed that farmers could use 50 to 100% less fertilizer without reducing yields.

“Plots with no fertilizer had no difference [compared to plots with full and half amounts],” said Max Torrey ’13, whose 12th generation family farm in Elba, New York was a trial site for the study. “People were skeptical, but this evidence gives us a lot more confidence in what we need to use.”

Onions, an important staple in most kitchens, are the fourth most-consumed fresh vegetable in the U.S., behind potatoes, tomatoes and sweet corn. New York growers have an added advantage with this high value crop due to their close proximity to large markets along the Eastern seaboard. But the market varies widely year to year depending on conditions in other growing regions and demand. Diseases and pests, especially the onion thrips, also eat into New York growers’ profits.

The onion thrips—tiny, winged insects that feed on onion plants – have been on Brian Nault’s radar for years. Nault, the study’s senior author and professor of entomology at Cornell AgriTech, said farmers used to rely on cost-effective weekly insecticide spray programs to control thrips. Then, in the late 1990s, thrips began rapidly developing insecticide resistance, because five to eight generations can be produced per year. Thrips also transmit a virus that can kill onion plants and spread bacteria leading to bulb rot.

To help preserve the effectiveness of remaining insecticides, Nault has been fine-tuning action thresholds so New York onion growers can remain profitable while spraying only when pest populations require it.

“The No. 1 reason farmers give for using action thresholds is mitigating the development of insecticide resistance,” Nault says. “The next new, good chemical tool may not come until 2025. They can’t afford to lose this one.”

In his new study, Nault and postdoctoral researcher Karly Regan aimed to further hone their integrated pest management strategy for onion thrips. They knew growers who continued using weekly spray programs instead of action thresholds were taking a significant risk by increasing the likelihood of resistance developing. But Nault also found studies that showed reducing fertilizer amounts could potentially reduce pests in certain crops. He added the factor in test trials.

Nault and his grower partners were amazed to find that the amount of fertilizer applied to an onion at planting had no impact on thrips population levels, bulb rot, or on onion bulb size and yield.

“We didn’t expect this, but it has an even bigger potential impact,” Nault said. “Reducing fertilizer use in commercial farming is beneficial to the environment for so many reasons, especially water and soil health.”

If all New York onion growers used action thresholds, Nault says they’d see a cumulative annual savings of $420,000 in pesticide costs. Already, he’s seen many growers reduce their fertilizer use this year by between 25 and 50% – a major change from applying a blanket amount to every field. Scouting for thrips and soil sampling each year are a little more work, but Torrey says he anticipates saving at least $100 per acre in chemical costs on his 2,200 acres of onions, in addition to the ecological rewards.

“The muck is our livelihood and our future,” Torrey said. “We must take care of it. Now we finally have a proven way to reduce costs and make New York onion growers even more competitive and sustainable.”

This research was supported by a grant from the U.S. Department of Agriculture’s National Institute of Food and Agriculture and Specialty Crop Research Initiative.

Sarah Thompson is a writer for Cornell Agritech.