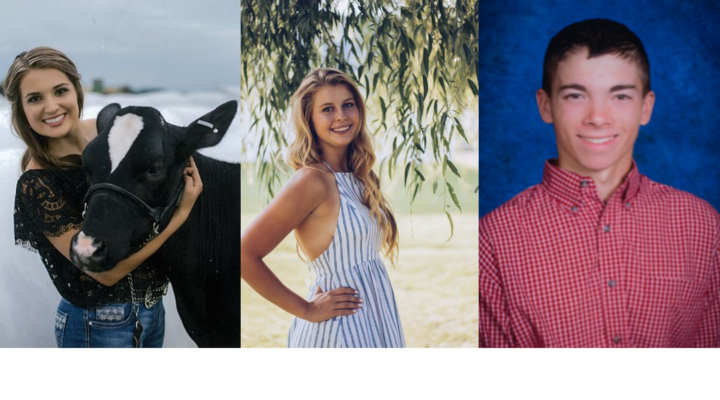 ALBANY — Three New York high school seniors have received the distinct honor of being named statewide winners of the 2019 New York Farm Bureau Agricultural Youth Scholarship. Each student received district-wide recognition and then competed for one of three statewide scholarships. The students must have a family Farm Bureau membership or a student Farm Bureau membership in order to qualify.  A panel of judges selected the winners based on their essay submissions, as well as their applications, which include their community and agricultural engagement.

The first-place winner is Alexis Payne of Glenfield, NY. She is a member of Lewis County Farm Bureau in District Six and will receive a $1,500 scholarship from New York Farm Bureau. Payne attends South Lewis High School where she is the chapter FFA President and is active in both 4-H and the New York Junior Holstein Association. She also served as New York State First Alternate Dairy Princess. Payne plans to attend either SUNY Cobleskill or Cornell where she will major in agricultural science. She hopes to one day work as a dairy nutritionist or agricultural educator.

The second-place winner is Anna Spoth from Clarence Center, NY where she is a student member of Erie County Farm Bureau. She is a senior at Clarence High School. Spoth grew up on her family’s farm where they raise livestock and pumpkins and open their doors to the public for tours. In addition, she works on a neighboring dairy farm milking cows. Spoth is active in 4-H, Cornell Career Exploration program, and competed three times at nationals in the “Make It with Wool” contest. She will attend Cornell University in the fall to major in animal science. Spoth will receive a $1,200 scholarship from New York Farm Bureau to apply to her education.

The third-place winner receiving a $1,000 scholarship is Brigham Logue of Johnsonville, NY, a Rensselaer County Farm Bureau member in District Eight. Logue attends Hoosic Valley High School where he has been active in 4-H for 13 years. His family has a small hay operation, and he manages a small flock of sheep, chickens and horses. Logue is also employed on a grain farm where he performs many duties from field work to equipment maintenance. In school, he is also involved in the Interscholastic Equestrian Association, Cambridge Saddle Club and was inducted into the National Technology Honors Society. Logue plans to attend Hudson Valley Community College in the fall to work towards an associate degree in Agriculture and Heavy Equipment Technology, ultimately getting a bachelor’s degree in management from a university.

Other district scholarship winners include:

District 2: Connor Galton is from Nunda, NY where he attends Keshequa Central School. Upon graduation, he will attend Clarkson University to major in mechanical engineering.

District 3: Annaleigh DeBoover is from Phelps, NY and attends Midlakes High School. She plans to pursue a degree in dairy production from SUNY Cobleskill.

District 5: Karly Marshman is from Oxford, NY where she attends Oxford Academy High School. She will attend Morrisville State in the fall to study agriculture science.

District 7: Maureen Price is from Huevelton, NY where she attends Huevelton Central School. Upon graduation, she plans to pursue a career in agricultural engineering.