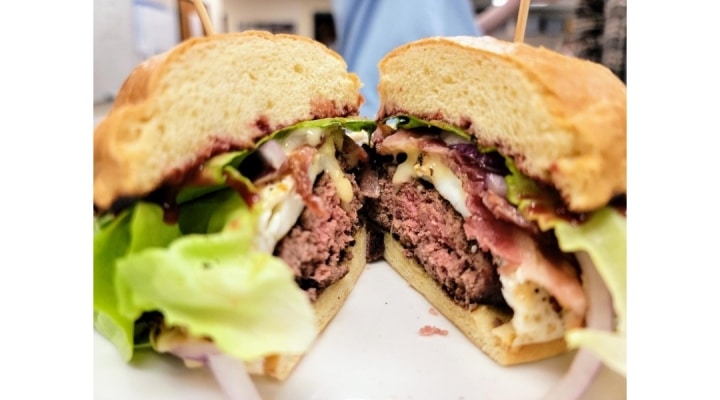 ROME, N.Y. — The New York Beef Council partnered with the New York State Restaurant Association Educational Foundation (NYSRAEF) and New York/Vermont ProStart to sponsor a first-ever Virtual Burger Battle. Both NYBC and NYSRAEF believed it was more important than ever to support students and educators during the virtual education challenges COVID-19 presented.  In April, students from New York and Vermont ProStart were tasked with creating a mind-blowing burger that showcased beef as a main ingredient! Students needed to include the burger recipe, photo of the finished burger as well as a 10-minute video showcasing the steps to bring all the components together.

Included in the sponsorship were two virtual beef experiences supported by NYBC. The first virtual experience was with Palmer Food Services.  Students had the opportunity to hear from team members of Palmer’s Meat Production, Culinary, and Marketing team as they were guided through what happens at the Palmers meat cutting facility.  The second virtual beef experience was a farm tour on May 25th.  NYBC virtually brought students to Thunder View Farms, owned and operated by the Coombe family in Grahamsville, NY.  Thunder View Farms was a 2019 National Environmental Stewardship Award winner. Guided by Patrick Coombe students via Zoom were shown handling facilities, feed rations, learned about documentation practices, and caught a glimpse of a newborn calf born earlier that morning!

Jean O’Toole, Executive Director of NYBC, facilitated the Zoom tours and stated she was impressed with the engagement and questions asked during the tours.  O’Toole went on to mention she was equally impressed with the burger submissions from students saying, “All the burgers looked amazing and delicious! We look forward to participating in a burger battle in person next year!”

The 2021 Winner was announced on May 26 via Facebook on the @NYSrestaurantassociation Facebook page. Julia Friedman from Wayne Technical & Career Center in Williamson, NY!  Julia made a caramelized brie, raspberry-hickory bacon burger with bib lettuce and red onion. Congratulations and great job on the burger! For her first-place finish, Julia won Air pods.

Learn in the garden