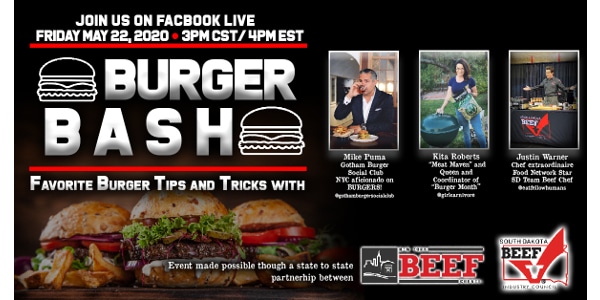 Justin Warner is an American chef best known for his appearances on Food Network, including the eighth season of the series Food Network Star, which he won. Justin regularly makes appearances on Food Network shows such as Guy’s Grocery Games as a judge and contestant. Mike Puma will also be joining the burger bash. Founder of The Gotham Burger Social Club, a group of 15 gentlemen who rate a different burger each month. They are now the most trusted source to find the best burgers in NYC. After 25 years in the city, Michael is no stranger to the robust and changing dining scene and shares all his culinary experiences on Instagram @gothamburgersocialclub. Rounding out the Burger Bash panel will be Kita Roberts. Kita is a professional photographer, content creator and social influencer – the lead creative force and “meat maven” behind the Girl Carnivore Instagram account.

Throughout the Burger Bash each culinary influencer will cook off a drool-worthy burger of choice to share with Facebook followers tuning in.  Throughout the segment the panel will also share their tips and tricks for creating the perfect burger whether it be flipped, smashed, or made over a campfire. Learn what these burger enthusiasts’ thoughts are on the best balance of toppings, bun choice, and what is the most epic burger creation they have ever discovered.

That is not the only fun happening this week! NYBC is hosting a Hamburger Hop & Beef Song Parody competition. Facebook followers are being challenged to create their own “Burger Hop” dance video in celebration of Hamburger Month. NYBC also proposed the challenge of re-writing a favorite song by “beefing up” the lyrics. Submissions are due May 30th for a chance to will $500 in beef bucks! Full contest rules and submissions are available at the Monthly Contest section of www.nybeef.org.

May is Beef Month and throughout the month NYBC is highlighting the hard-working people who produce beef on their farms all through NY and the United States. New York Beef Council and the South Dakota Beef Industry Council have a strong state to state partnership putting beef checkoff dollars to work in NY, where over 19.4 million consumers call home.