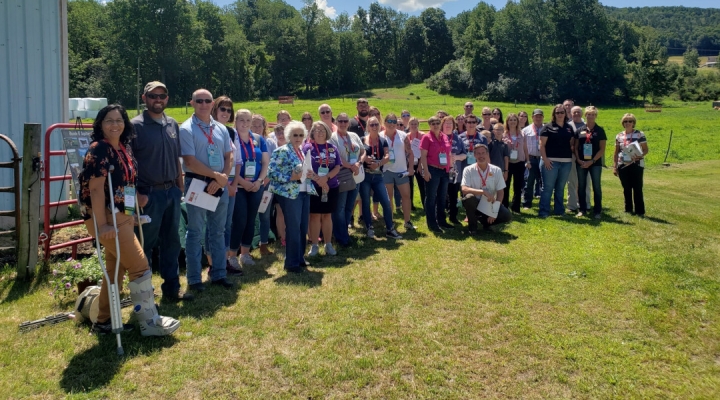 SARATOGA SPRINGS, N.Y. —  The New York Beef Council (NYBC) on behalf of the New York Beef Checkoff and funding from the Iowa Beef Industry Council recently attended the National Agriculture in the Classroom Conference in support of their continued partnership with New York Agriculture in Classroom. The National Agriculture in the Classroom Organization works to increase the agricultural literacy of teachers and students by helping them communicate the source and value of agriculture in our lives. This year’s national conference was hosted in Saratoga Springs, NY, and was the premier professional development event for Pre-K through 12th-grade teachers, volunteers, and professionals in agricultural literacy.

On Day 1 of the conference, the NYBC took 55 educators on a sponsored beef immersion experience hosted by the Perkin’s Family at Easton Station Farms in Greenwich, NY. Educators from several states attended and were treated to three round-robin educational workshops during a three-hour fast-paced farm tour. Participants were introduced to the beef production lifecycle, the environmental sustainability efforts of beef farmers and ranchers, the biology of healthy soil, and beef labeling 101. A highlight of the farm tour was the rainfall simulator demonstration that Fay Benson facilitated on behalf of the NY Soil Health Trailer which is funded by the New York Natural Resources Conservation Service (NRCS).

On Day 2 of the national conference, the NYBC facilitated a “Project-based learning through Beef Workshop” where teachers were led through a hands-on interactive demonstration featuring the NYBC’s Top Cuts a Beef Contest Program through a mock contest execution exercise. The workshop focused on strategies for full-school cross-curricular integration of food and agriculture. Participants utilized beef jerky and other supplied ingredients to create a trail mix snack recipe. The workshop concluded with an interactive challenge that included a competitive group pitch competition of the beef jerky trail mix developed by the educators during the challenge portion of the workshop. Educators interested in discovering more about the NYBC’s Top Cuts Competition should visit https://newyork.agclassroom.org/programs/topcut where more information can be found about the annual competition hosted for NYS schools.

The NYBC continues to extend and support its outreach efforts to teachers and educators through several opportunities annually. Interested schools are urged to visit: https://www.nybeef.org/education/classroom-resources to utilize the classroom resources offered to educators. This educational event was made possible through the NYBC’s continued partnership with the Iowa Beef Industry Council. The New York Beef Council, funded by the Beef Checkoff, is responsible for education outreach and promotion efforts on behalf of beef and dairy farmers. NYBC continuously works toward the mission of enhancing the lives of consumers by connecting them with beef and the beef community.