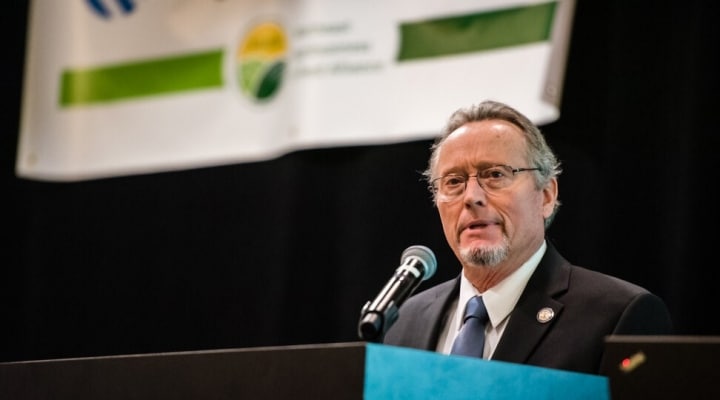 ALBANY — The National Association of State Department of Agriculture (NASDA) held a virtual meeting August 28th to September 3rd, during which industry leaders tackled pressing issues for agriculture at large throughout the US, elected new leadership to the NASDA board, refocused the group’s mission statement, recognized public servants that have dedicated their life to furthering the growth of the US agricultural industry, and more. New York Commissioner of Agriculture Richard Ball graciously shared his time with NEAFA representatives to talk about how the meeting went. “It was challenging, but we did the best job we could holding a virtual meeting,” said Ball. “I remember the first time I attended a NASDA meeting six years ago. I was overwhelmed at having the opportunity to spend time with the other commissioners and secretaries of agriculture and other key people in agriculture in general. It is great to sit side by side and weigh in on policy issues that affect New York. Every serious national policy issue effects New York, and we have a seat at the table. This year may have been virtual, but it went as well as it possibly could have gone. It was great to have a chance to listen and speak with [US Secretary of Agriculture] Sonny Perdue and Beth Ford of Land O’ Lakes, Inc. She’s truly a dynamic speaker.”

For Ball, the relationships that are created through his involvement with NASDA are an integral part of his advocacy for NY agricultural interests. “The value of relationships can’t be overstated,” said Ball. “for me personally, and for NY to have access to the higher levels at USDA, and the USDA Secretary and undersecretaries, many of which are largely former commissioners from around the country, to have that close relationship is key. At NASDA in the past 5-6 years, I’ve seen such a positive change because of having a relationship with NASDA and the agencies in the federal government. NASDA members know the directive of their state’s producers and how we need to move policy directions. We’re being tapped as a national organization to weigh in on issues with all of the agencies that interact with agriculture. With the fellow commissioners, we all talk often. The executive board and head of committees, we typically talk every two weeks to stay on top of new topics and issues in the industry.”

During the annual meeting, NASDA tackled an issue close to Ball’s heart, diversity and racial equity in the agricultural industry. “I’m particularly proud of NASDA for making a statement and setting a policy plan that re-emphasizes diversity and racial equity,” said Ball. “We brought in a number of states that had a lot of passion on this topic to make sure we got this right. The whole executive committee and staff devoted a lot of time to this issue, which is so important.”

According to Ball, there has been a lot of data to sift through when it comes to accounting for who is involved in the industry. “There’s a lot of agricultural statistic data to go through, which of course includes the movement from small to large farms, and consolidation you see there,” said Ball. “It’s all important data to have, but a couple of things jumped out at me. One is that we saw an increase in the numbers of women in agriculture. There are more women getting involved, and NASDA has also been looking at it closer to make that count more accurate compared to the past. There have always been women involved in the industry, however they were sometimes overlooked unfortunately. It’s good to see that number growing and accurately represented. Some states also saw higher numbers of Latino farm owners, which makes sense given the high number of workers with Latino heritage. Overall, we saw a decrease in acres owned by minorities compared to 20 years ago.”

That data made Ball tackle the issue locally. “Here in NY, when we saw that, we went to the Hunger and Food Policy Council,” said Ball. “We have key farmers there, food banks there, Cornell Co-Operative, etc., the key players in food are all around the same table, including minority farmers. We talked about this issue with that organization to find out what’s going on in our communities. Unfortunately historically speaking, we have a very poor record of respecting the ownership of lands by minorities. Some progress has been made, but it’s slow, late, and not working well. Governor Cuomo has asked us to put together a work group to focus on the issue. To see NASDA take that on was heartwarming and good to see. We invited MANRRS [Minorities in Agriculture, Natural Resources and Related Sciences], to talk as well. There’s a MANRRS chapter at Cornell, and revitalizing that chapter and spreading it out to other land grant schools in NY is important for the future. If I was to put a singular takeaway from the NASDA annual meeting this year, putting a focus on including minorities and increasing diversity into practice and having that become part of our policy going forward is so important.”

NEAFA would like to thank the commissioner and his staff for taking the time to share his input on NASDA and its recent annual meeting. We would also like to congratulate the Commissioner on his new role on NASDA’s Executive Committee as Vice President.

The mission of the Northeast Agribusiness & Feed Alliance is to advocate, collaborate and educate on behalf of our members, the animal agriculture industry and other stakeholders in New York and the six New England states.

Find out more about the Northeast Agribusiness and Feed Alliance (NEAFA) and learn how to become a member: click here!