Home » Nutrition is key in preventing problems at calving time 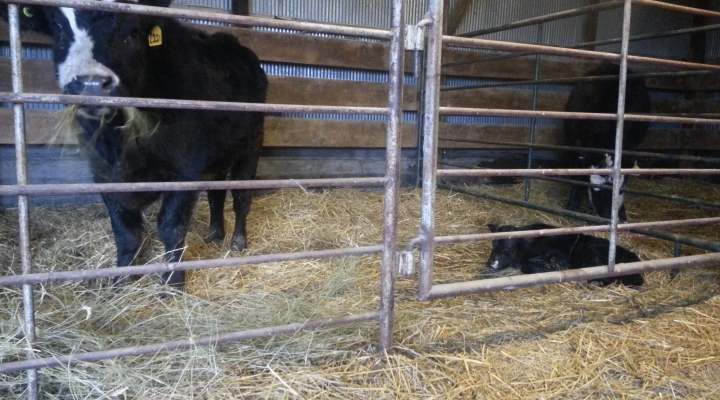 Nutrient requirements for cows in late gestation are second only to cows in peak lactation, around two months after calving. (Courtesy Photo)

FARGO, N.D. — Feed quality is a major issue during drought years that can result in nutrient deficiencies in pregnant cows. These deficiencies can cause several metabolic disorders that may result in recumbency (cows going down) prior to, or after calving, warn NDSU Extension specialists.

Nutrient requirements for cows in late gestation are second only to cows in peak lactation, around two months after calving.

“This year, ranchers are facing a variety of challenges in providing pregnant cows with adequate rations due to limited forage supplies, forages with low protein and energy content, and limited availability of high-priced supplements,” says Janna Block, NDSU Extension livestock systems specialist based at the Hettinger Research Extension Center. “Increasing fetal demands combined with low-quality diets can result in body condition losses and metabolic issues resulting in down cows.”

One of the conditions experienced by cows in late gestation is pregnancy toxemia, which occurs when fetal energy demand exceeds the maternal supply during the last trimester of pregnancy. Rumen capacity is reduced during late gestation, which reduces voluntary feed intake. The situation is intensified by feeding low-quality, lowly-digestible forage that does not satisfy increasing nutrient requirements.

In extreme energy deficiency, the lack of available glucose signals the body to mobilize fat tissue. Fat deposits are then carried to the liver to be converted to glucose. Fat builds up in the liver and it releases elevated levels of ketone bodies into the blood. Excess ketones can result in metabolic acidosis and toxicity that can cause nervous system disfunction and brain damage.

Cows carrying large or multiple fetuses and those with health conditions such as lameness or disease are particularly susceptible, Stokka notes. Toxemia may occur in cows of all ages and may occur at high levels within a herd due to widespread nutritional deficiencies. Both thin and fat cows can be affected, but it is more likely that toxemia will occur in over-conditioned cows losing large amounts of body condition over a period of several weeks.

“When feeding straw, annual forages or drought-affected forages, lack of energy is not our only concern,” says Block. “An imbalanced mineral profile can also result in a variety of metabolic disorders that result in down cows.”

Production of colostrum begins around 4 to 6 weeks prior to calving, and high levels of calcium are pulled from body stores into the udder. Even if calcium is adequate in the diet, absorption is limited, and the cows may not be able to mobilize bone calcium to meet increased metabolic demands. Although milk fever or hypocalcemia is generally associated with older, high-producing dairy cows, it can also occur in beef cattle. Sudden decreases in calcium levels cause hyper-excitability of the nervous system and muscular weakness, lowered temperature, increased heart rate and down cows.

Other metabolic conditions can result in hypocalcemia, including excess phosphorus and low magnesium. In addition, conditions such as reproductive tract infections, injuries from calving, nerve or muscle damage, retained placenta and prolapsed uterus are associated with milk fever.

In addition to its association with milk fever, low magnesium can result in a tetany situation.  Although most people think of tetany risks associated with rapidly growing spring forage, it can also occur during fall or winter when feeding harvested grass, alfalfa, or annual forages that are low in magnesium, says Block. Because magnesium is critical to the nervous system and muscle function, a deficiency can result in incoordination, hyper-excitability, muscle twitching, incoordination and stiffness. This condition also is associated with high levels of potassium, which interfere with magnesium absorption and magnify the deficiency.

“There are several oral or intravenous treatment options for many of these conditions,” Stokka says. “The most important thing is for producers to contact their veterinarians immediately if they experience any down cow cases. They will typically conduct a thorough exam and get details on the animal’s history that will help determine effective treatment.”

In addition to metabolic issues, down cows that are close to calving could have miscarried and be suffering from a secondary infection. Unexplained injury or trauma also could have occurred.  Therefore, it is important to evaluate each individual situation.

The presence of one or more down cows in a herd can indicate a potential herd-wide emergency. Preventing these situations requires sampling and analysis of feedstuffs and managing late-gestation nutrition. Water quality also may be a factor in some situations, so it is a good idea to conduct a livestock suitability analysis. In addition, avoid adding stress associated with processing or handling cattle within a month of calving to reduce the likelihood of down cows and calving issues, adds Stokka.

“Providing adequate amounts of nutrients and high-quality water is critical for pregnant cows,” says Block. “Careful monitoring of cattle prior to calving is important to recognize potential nutritional challenges and acting quickly can increase the likelihood of saving downed cows and preventing additional issues.”

Tips to maximize every input dollar