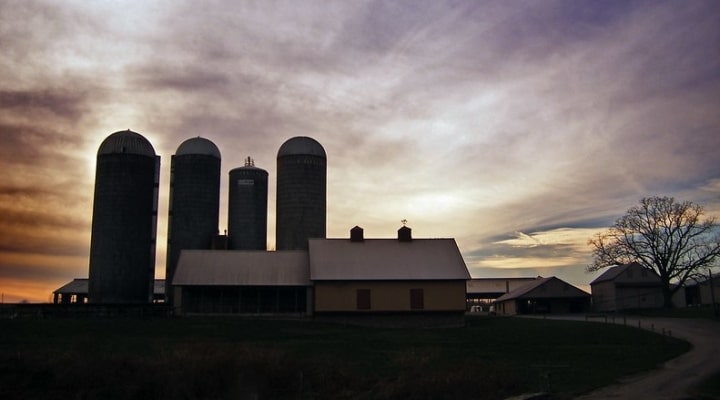 While prices climbed last year, the total number of cows has been decreasing. The state ended the year with an average of 125,583 cows, compared to 126,833 in 2018. (Nicholas A. Tonelli, Flickr/Creative Commons)

ESSEX, Vt. (AP) — Vermont lost an average of 48 dairy farms last year, dropping the total number of dairies to about 677, with the smaller operations taking the biggest hit, according to statistics released by the Vermont Agency of Agriculture on Thursday.

The news comes as dairy farmers have struggled in recent years with prolonged low milk prices, President Donald Trump’s international trade wars, and other challenges. Last year milk prices paid to farmers rose by about $2 compared to 2018, Diane Bothfeld, the agency’s director of administrative services, told a gathering of dairy farmers at an annual meeting at the Vermont Farm Show.

The number of farms that went out of business was lower than the horror stories that the agency hears at the beginning of each year predicting that 100 to 200 will fold, she said.

“We have not seen that over the last four and five years. Not a hundred farms per year. Forty, fiftiesh. Too many, too many, but not the horror stories of hundreds going out,” Bothfeld said.

Although there are fewer cows the size of farms is growing. The average number of cows per Vermont farm rose from 175 to 185 in 2019.

What is also growing is the number of dairy processors, which rose from 146 to 154 in 2019. That includes both off-farm processing, like Ben & Jerry’s, and on-farm where milk is turned into cheese or other products on the farm.

“The ones that are growing are the smaller ones at this time,” she said.

“Certainly it’s going to open up the Canadian market a little bit. More importantly in my mind is that it secures that Mexican relationship that we’ve worked so hard to build and making sure that that product can flow freely into Mexico is really important for us,” de Ronde said.

Watch for signs of trichomoniasis in cattle
June 1, 2020