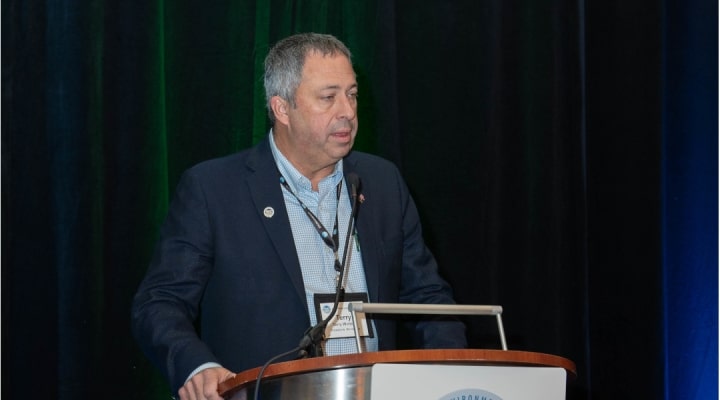 Terry Wolters of Pipestone, Minnesota, was elevated to president of the organization for 2022-2023. (Photo: 2020 National Pork Board, Des Moines, Iowa)

Wolters takes over from Jen Sorenson, communications director for Iowa Select Farms in West Des Moines, Iowa, who becomes NPPC immediate past president and chairman of the council’s trade and nominating committees.

Scott Hays of Monroe City, Missouri, became NPPC president-elect. He is a fifth-generation pork producer and the CEO of Two Mile Pork, LLC. He is chairman of NPPC’s Competitive Markets Committee and active on the Missouri Pork Association board and committees, Missouri Corn Growers, Missouri Farm Bureau, Missouri Agricultural Leaders of Tomorrow, Monroe City FFA and Missouri Institute of Cooperatives.

The NPPC board of directors elected Lori Stevermer as vice president. Lori is co-owner of Trail’s End Farm in Easton, Minnesota, where she served on the executive board of the Minnesota Pork Producers Association. Stevermer has a history of advocating for the pork industry at the local, state and national levels.

Pat Hord of Ohio and Dwight Mogler of Iowa were elected as new members of the board, and Lori Stevermer of Minnesota and Russ Vering of Nebraska were each reelected to another three-year term. Steve Malakowsky of Wells, Minnesota, with Compeer Financial, was elected to a two-year term as the allied industry representative. They join current directors Craig Andersen of Centerville, South Dakota; Iowa; Rob Brenneman of Washington, Iowa; Jason Brestler of Sioux City, Iowa; Bob Ivey of Goldsboro, North Carolina; Dr. Jeremy Pittman of Waverly, Virginia; Jeb Stevens of Osgood, Indiana; and Duane Stateler of McComb, Ohio.

For NPPC’s nominating committee, Curt Zehr of Illinois was reelected, and Bill Knapke of Ohio was elected to the panel. Both will serve two-year terms.

“We have great leadership in Terry, Scott and Lori,” said NPPC CEO Bryan Humphreys. “Along with the board, including our new members, they will represent the interests of pork producers and the organization very well.”

Additionally, delegates at the meeting approved resolutions affirming the recommendations of the Pork Industry Taskforce.