Home » Now’s the time to scout for scales in citrus 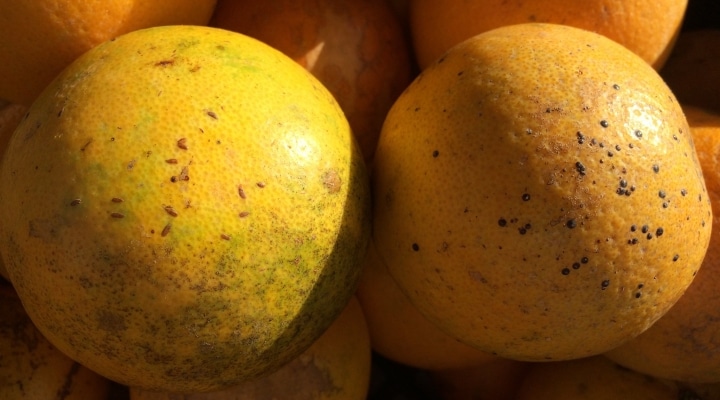 MONTICELLO, Fla. — Traditionally, scale insects in Florida have been controlled by natural enemies and considered a minor pest. However, many citrus growers in the Panhandle experienced high populations of scales, specifically of the Florida red scale (Chrysomphalus aonidum),  and false Florida red scale (Chrysomphalus bifasciculatus) last growing season. Since the majority of citrus grown in this region is marketed for the fresh market, scale is of particular concern, as its presence reduces the marketability of the fruit and results in losses for the grower. Now is the time to be monitoring for immature scales to aid in making effective management decisions.

In the past, Florida red scale used to be very well controlled by natural enemies, including ladybeetle predators and other parasitoids. Some factors that could have attributed to the increase in scale populations are: 1) weather conditions, 2) movement of pests into groves where natural enemies do not occur, and/or 3) repeated applications of broad-spectrum insecticides during periods when natural enemies are active. Based on these factors, the first and perhaps most important step towards managing these pest should be to eliminate any unnecessary insecticide applications. Since many insecticide programs are targeted at managing citrus leafminer, these should be evaluated, and in mature groves, reduced as mature trees sustain little leafminer damage.

Despite its name, the Florida red scale is native to Asia and is currently widespread in all tropical and subtropical regions of the world. This species is an armored scale, characterized by sessile (either very slow moving or not mobile at all) females and nymphs. It has a hard and waxy circular armor that is dark reddish brown with a light brown center. Adult females are about 2-2.2 mm in diameter and deposit bright yellow eggs under the scale armor.

Control of armored scale is particularly difficult as they spend most of their life protected by the scale cover. It is only the earliest nymph instar that is mobile and unprotected. Since this stage is mobile, the moving nymphs are referred to as “crawlers.” This stage is the most susceptible to insecticides. Therefore, it is important to monitor for crawlers now to target insecticide applications for this life cycle stage.

Insecticide applications targeted for scales are only recommended if the population is at a high density and causing significant damage to trees or fruit. Currently, there are no economic injury levels or thresholds for scale insects in Florida. Therefore, the grower must evaluate the situation, the intensity of the population and how much damage is likely to occur.

When monitoring for scales, it is important to base management decisions on the population levels of living scales. It is not uncommon to mistake scale bodies from previous generations and/or parasitized scales for living scales, resulting in an insecticide application that may have not been necessary. To monitor for scale crawlers, use double-side sticky tape wrapped around a citrus branch or near scale adults and check weekly.

When scales are in the crawler stage, most insecticide labeled for scales will be effective in controlling the population, however, buprofesin (IRAC MOA 16) and spirotetramat (IRAC MOA 23) are the best options. It is important to note that thorough coverage is important, as scales are largely immobile and direct contact of the insecticide is essential.