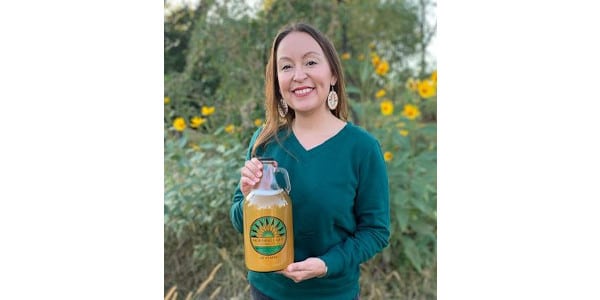 When Melinda Williamson was diagnosed with an autoimmune illness in 2010, she found that drinking kombucha aided her health. Now she is brewing and marketing her own kombucha at eleven locations across northeast Kansas and is looking to expand. (Courtesy of K-State Research and Extension)

MANHATTAN, Kan. — Let’s go to the 2019 National Restaurant Association Expo in Chicago. Food suppliers are displaying products from across the nation. Only one of these suppliers is a producer of a healthy, fermented drink called kombucha that promotes health in a person’s gut. This remarkable business is owned by a Native American woman who lives in rural Kansas.

Melinda Williamson is the founder and owner of the business called Morning Light Kombucha, the only such business at this 2019 national foods show. Melinda was born and raised in Topeka. She is of Native American descent, specifically from the Prairie Band Potawatomi Nation.

“I always dreamed of having my own business,” Melinda said. “I think I started a little cleaning business when I was in the fourth grade.” As she grew older, she became very interested in science. She got a B.S. in natural history biology at K-State and then worked as a senior research specialist in a laboratory at Oklahoma State where she got a master’s in rangeland ecology and management, all while raising her daughter.

“As my daughter got older, I thought about coming back to our home area so that we could be closer to family,” Melinda said. They moved back to the reservation near Mayetta and she took a position working for the tribe

In 2010, Melinda was diagnosed with an autoimmune illness. “I was really sick,” Melinda said.  She sought to improve her diet and health and found that drinking kombucha and green smoothies helped. She started making kombucha of her own. “People loved it and they wanted it.” She went to workshops put on by the Small Business Development Center to help develop plans for a kombucha business.

In March 2016, Melinda launched Morning Light Kombucha. Her business is based in values of health and sustainability which are very important to her.

What is kombucha? It is a fermented, non-alcoholic tea that is rich in beneficial bacteria and B vitamins. “I start with a green and black tea blend and add sugar, filtered water, and the fermented culture,” Melinda said. In four to six weeks, most of the sugar is consumed. The result is a bubbly, tart, low-sugar drink that is rich in probiotics and organic acids. “It is a great power-packed drink, a good alternative to soda. We recommend people drink four to eight ounces a day,” she said.

The goal is a healthy gut. “The digestive system needs to be in balance,” Melinda said. “I’ve gotten a lot of healing from it, and I wanted to help others.”

Why the name Morning Light? “In my tribe, morning is a time for prayer,” Melinda said. “The light of a new day marks a time for a fresh start.”

As her business grew, Melinda expanded her production kitchen in nearby Hoyt. Her Morning Light Kombucha is now served on tap at eleven locations across northeast Kansas and she’s seeking to grow. Her commitment to sustainability includes composting and recycling of brewing waste, selling kombucha on tap in refillable bottles, and recycling straws, lids, and sample cups.

Melinda works with a network of local organic producers as her suppliers. “Ninety percent of our ingredients are sourced from local farmers,” she said.

Morning Light Kombucha is a member of the Kansas Department of Agriculture’s From the Land of Kansas program as well as Kombucha Brewers International. It is also a trademarked American Indian Foods product through the Intertribal Agricultural Council. A portion of her business’s proceeds are donated to those in native communities, such as helping native students travel to Washington, D.C. “We give back where we can,” Melinda said.

It’s great to find a business like this in a rural community such as Hoyt, population 642 people.  Now, that’s rural.

For more information, go to www.morninglightkombucha.com.

It’s time to leave the National Restaurant Association Expo in Chicago, where a Native American woman from Kansas is the only kombucha brewer present. We salute Melinda Williamson for making a difference with a business committed to health and sustainability. Such entrepreneurs can give us a good gut feeling.