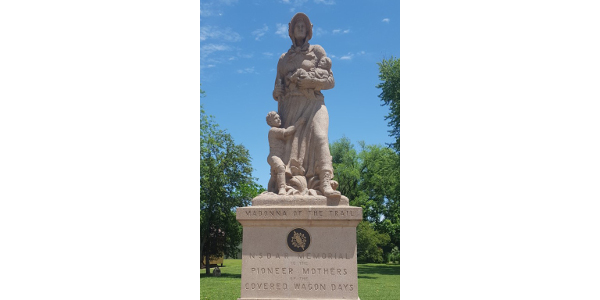 More than a century ago, the Daughters of the American Revolution began the process of placing statues to honor pioneer women across the nation. Only twelve of those statues were built and placed across the country, and one of those can be found in Council Grove, Kansas. (Courtesy of K-State Research and Extension)

MANHATTAN, Kan. — The woman stands 8 feet tall and 3 feet wide. Wow, that would be quite a basketball player. But this is no basketball player, it is a statue.  Specifically, it is a monument to the pioneer women of America. It is one of only 12 such statues which are located across the nation. This one is found in rural Kansas.

Kay and Diane are strong advocates for Morris County. “There are more historic sites on a per capita basis in Morris County than Washington, D.C.,” Kay said. As a key community along the Santa Fe Trail, Council Grove is the location of the Custer Elm, Post Office Oak, and 20 or more other historic locations.

One prominent site in Council Grove is the Madonna of the Trail statue. The history of this statue goes back more than a century.

In 1911, the National Society of the Daughters of the American Revolution established a national old trails road committee to explore establishment of a national memorial highway. That led to the founding of the National Old Trails Road Association in Kansas City in 1912. This group promoted the creation of a national highway from Cumberland, Maryland to California, part of it along the route of the Santa Fe Trail. The DAR chose to place statues in the 12 states along this route.

The purpose of these statues, according to the DAR website, was to “provide a symbol of the courage and faith of the women whose strength and love aided so greatly in conquering the wilderness and establishing permanent homes.”

Sculptor August Leimbach was commissioned by the DAR to create these twelve identical statues, funded entirely by private contributions. The design was titled Madonna of the Trail.

The sculpture depicts a pioneer woman striding forward in sunbonnet and long skirt. A young boy is clutching her side. She holds a baby with one arm and a rifle barrel with the other. The head of a rattlesnake can be seen in the grass at her feet.

Each sculpture is placed on a 10-foot base. The sculpture and base together weigh five tons.

The sculptures were dedicated in 1928 and 1929. At that time, the president of the National Old Trails Association was none other than the future U.S. president, Harry S Truman.

The statues were located in the 12 states along the route, in communities where there was a DAR chapter to support it. In Council Grove, the statue is located in a pretty park at the intersection of Highways 177 and 56.

Phyllis Metzger at Council Grove is active in the DAR. The Kansas State chapter of DAR pays for upkeep on the statue.

“We are very proud of her,” Phyllis said. “What those women went through to go west in those days was absolutely phenomenal.”

All 12 statues still stand in the same communities, although some have been slightly moved due to road construction. Only one of those statues is placed so that it faces east. That one is in Bethesda, Maryland. The local joke is that the statue was placed facing east because no sensible woman would turn her back on Washington, D.C.

The twelve statues are a lasting memorial to those brave frontier women. “The statue represents how those women were so instrumental in the settling of America,” Diane Wolfe said.

It is exciting to find this statue in the rural community of Council Grove, population 2,051 people. Now, that’s rural.

The woman stands 10 feet tall and 3 feet wide. She is a larger-than-life depiction of the pioneer women who bravely made their way west. We commend Diane Wolfe, Kay Hutchinson, Phyllis Metzger, and all those who are making a difference by honoring this history. I’m glad each of these sentinels still stands, as the Madonna of the Trail.