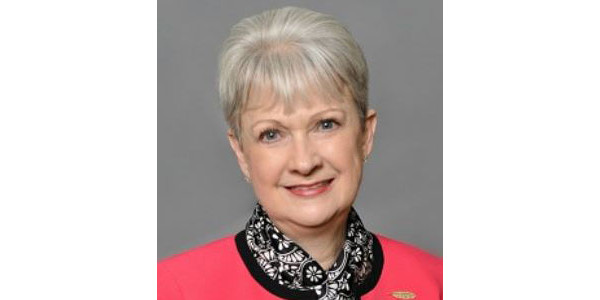 The city of De Soto was looking for a city clerk in 1998 and a local paralegal named Lana McPherson got the job. Not only has she continued to serve for the following 21 years, she has risen through the ranks to become the international president of her professional association. (Courtesy of K-State Research and Extension)

MANHATTAN, Kan. — Let’s go to London, England. It’s a meeting of the International Institute of Municipal Clerks, led by the president of this international organization. This year’s international president comes from a small town in Kansas.

Lana McPherson is president of the International Institute of Municipal Clerks and the long-time city clerk of De Soto, Kansas.

Lana grew up at De Soto, attended Johnson County Community College and Rockhurst University. She worked as a paralegal in several law offices and then for a multi-state insurance company.

She also met and married Ian McPherson, a soldier who had served at Fort Riley and then moved to Olathe to be close to family. They made their home in De Soto.

In 1998, the town council was looking for a new city clerk. Lana accepted the position in June. “I reached out to several experienced city clerks in surrounding communities and they took me under their wing,” Lana said.

In November of that year, Lana attended a weeklong training program developed by the International Institute of Municipal Clerks, or IIMC. The training institute is conducted annually by the Hugo Wall Center for Public Affairs at Wichita State.

When Lana got into this class with the other city clerks, she immediately noticed two things. First, she had the shortest tenure in office of any of the clerks, and second, she was the oldest clerk in the class. “By the end of the day they were calling me `clerk mom,’” Lana said. “It is a term that I treasure.”

Lana deeply valued the training and the relationships which developed in the process.  She has served as De Soto city clerk ever since. She also pursued the advanced certifications that are available through ongoing education from IIMC.

Having seen the benefits of IIMC, she got involved in the organization and was ultimately asked to run for president of the group. “I prayed at lot about it,” Lana said. It is a four-year commitment to go through the chairs of the executive committee. In 2017, she successfully ran for vice president of IIMC which meant that she became president of the international organization in 2019.

“Our primary goal is to actively pursue and promote the continuing education and professional development of municipal clerks through extensive education and certification programs,” Lana said.

“We also need to let communities know the importance of their clerks being certified, because clerks have important statutory duties which they carry out,” Lana said.

“The city clerk’s office is the hub of the city government’s activity,” she said. “We are the glue that holds the city together. We keep the official records of the city, but it goes beyond that to be a liaison between the city council and the staff and the community.”

Lana has found that city clerks around the world have common challenges. “City clerks are like family,” Lana said. IIMC has 14,765 members around the globe. How impressive that this year’s international president is from the rural community of De Soto, population 5,720 people. Now, that’s rural.

“I love my job. I love what I do,” Lana said. “We have a great staff here. My mayor and city administrator and city attorney are so supportive, they’ve made it possible for me to do this.”

She takes her role in serving the citizens very seriously. Lana plays piano and organ at various churches in town. “People will come up and ask about some city project, or hand me their water bill and ask me to drop it off when I go to work the next day,” she said.  “It’s my way of giving back to those people who gave me so much support growing up.”

It’s time to leave England, another place where Lana McPherson is making a difference with her commitment to local government. How great to find that a person from small-town Kansas can make a big impact.

US soybean exports to Pakistan increase