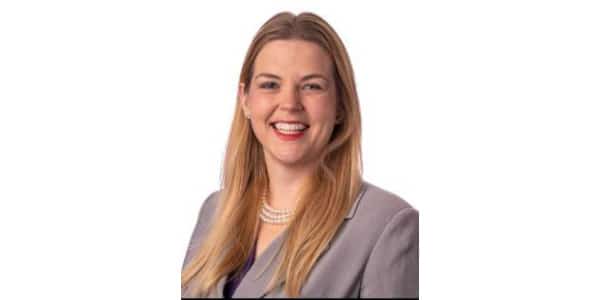 While living on a Kansas farm and working for a farmer-owned cooperative, Jackie Mundt got involved with Kansas Farm Bureau. By winning the organization’s national discussion meet and the national Excellence in Agriculture award from the American Farm Bureau Federation, she won both of the two young farmer and rancher awards for which she could qualify. (Courtesy of K-State Research and Extension)

MANHATTAN, Kan. — Growing food and growing people. Those two are not the same, but they both have to do with positive development for the future – and they are the two motivating priorities that inspire one young Kansas leader daily. They have helped propel her to not one, but two national agriculture awards.

Jackie Mundt is communications and marketing manager for Kanza Cooperative Association and a two-time winner of national awards from the American Farm Bureau Federation. She and Marc Rundell live on Marc’s family farm in Pratt County.

Jackie MundtJackie grew up on a dairy farm in Wisconsin. She was active in FFA and was elected national FFA president in 2004. Her duties involved traveling to FFA chapters, schools, and other meetings across the United States and beyond. One of those meetings was the state FFA convention in Fresno, California.

“I fell in love with the people and the campus there,” Jackie said. She ultimately enrolled at Fresno State University and earned a degree in agricultural communications. Along the way she met Kansas farmboy Marc Rundell.

After college, Jackie took a position with Dow AgroSciences and was assigned territories in Oklahoma and Kansas so she moved to Marc’s hometown of Pratt. She moved up to Dow’s corporate headquarters back east and then came back to Kansas where she took her current position with the Kanza Co-op and moved to the farm. The Rundell family farm is located near the community of Preston, population 158 people. Now, that’s rural.

Jackie also participates in the Kansas Agriculture and Rural Leadership program while working on a master’s degree in ag communications from Kansas State University. “My passions are youth development, agriculture advocacy, and community vitality,” Jackie said.

While in FFA, Jackie became acquainted with the Farm Bureau organization and has been active in the organization ever since. “Farm Bureau has been so important in helping me connect with people in the ag world,” she said. While in California, Jackie won the state-level collegiate discussion-meet competition sponsored by Farm Bureau.

The discussion meet is not a public speaking contest but is an agricultural issues dialogue in which the most effective communicator is selected as the winner.

In Kansas, she became involved in her local and state Farm Bureau organizations as well – particularly the Farm Bureau Young Farmer and Rancher program, which is for members ages 18 to 35. Jackie participated in the Young Farmers and Ranchers discussion-meet competition and won the Kansas contest. That earned her the right to compete at nationals. In 2019, she won the national title.

In addition to the discussion meet, the Young Farmer and Rancher program offers two other awards: One for a full-time ag producer, and a second for people who are agriculture supporters but whose income derives mostly from the farm. Jackie qualified in the latter category, called Excellence in Agriculture. This involved an extensive application and a verbal presentation. “I practiced hardcore,” Jackie said.

To Jackie, the awards are less important than the priorities which enabled her to win them. “I’m passionate about people and about food,” Jackie said. “Being raised on a farm, I know ag and food are important to everyone,” she said. “I feel strongly about serving people and making the world around us better,” she said.

Jackie is advisor to the collegiate Farm Bureau chapter at Pratt Community College and is actively involved in promoting FFA and 4-H in her region. She works hard to empower and encourage youth, and also works to enhance her community. “Rural life is important to us. I want this to be a really great community,” she said.

Growing food and growing people. Those are the goals of young rural leader Jackie Mundt. We commend Jackie and other young farmers and ranchers for being part of a new generation of agricultural producers. Whether the result is better food supplies or better people, Jackie Mundt is helping them to grow.

Mark your calendar for Farmer U on August 18-19