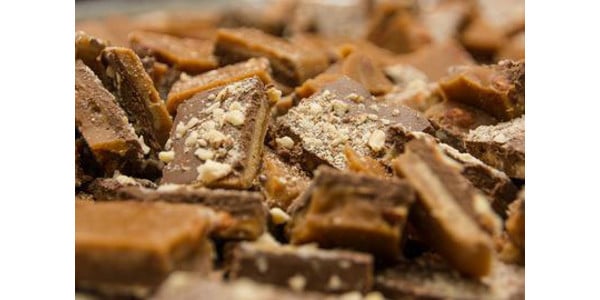 Tonja Williams’ family recipe for toffee was always a big hit when she would share treats. It turned into an online business which has shipped toffee coast to coast. After Tonja passed away from cancer, her mother Carrie Marion and daughter Haley Stratmeier have carried on the business. (Courtesy of K-State Research and Extension)

MANHATTAN, Kan. — “That tastes so good, you should sell it!” Perhaps you’ve heard that phrase when someone shares a delicious treat. Today we’ll learn about a family which took that statement seriously, and their product became the basis of a remarkable business. Last week we met Phyllis Cheney, whose flower shop in Chapman sells various products including Tonja’s Toffee. The toffee is delicious, but the backstory is bittersweet. It involves a remarkable product made by a remarkable woman who battled cancer for many years. Now her family is continuing her legacy.

Tonja, the founder of this business, grew up in Scott County. She met Alan Williams at a church barbecue and the two married. She became a farm wife and teacher, raising four children.

As a little girl, Tonja had enjoyed making toffee with her mother Carrie Marion. Tonja continued making toffee as she grew older and tweaked the family recipe to make it her own.

After Tonja married and became a teacher, she would bring her homemade toffee in to school during the holidays. Her friends raved about it. “That tastes so good, you should sell it,” they would say. Tonja would modestly decline.

Then two things happened. First, her son needed to raise money for a mission trip to Ukraine, so they decided to sell her toffee as a fundraiser for the project. Secondly, Tonja was diagnosed with multiple myeloma and she knew she wanted to move forward with this project while she could.

The toffee sales for the mission trip were a rousing success, and the money was raised in a matter of weeks. It was also a market test which demonstrated that there was a demand for the product.

“We were bombarded with orders,” said Haley, Tonja’s youngest daughter. “The business took off after that.” It was named Tonja’s Toffee. Haley remembers one craft show in particular where they sold 200 pounds of toffee in a single day.

“Mom was an excellent baker and cook,” Haley said. “She was creative and professional and very particular about how the toffee was made.” Those high standards of excellence led to good results as the business grew.

Daughter Haley and some neighbor girls would pitch in to help make the toffee whenever they could. Haley got married in 2015 and is now raising two children of her own. Meanwhile, Tonja was operating the business while continuing her treatment for cancer. On November 24, 2017, eight years after the original diagnosis, Tonja passed away. The family decided to close the business.

Then Tonja’s parents retired in Scott City and found they could convert one room in their house into a commercial kitchen. Haley’s husband took a job at a local feed yard and they moved back to the home place where Tonja’s Toffee had begun. The farmhouse is in western Scott County near the tiny, unincorporated rural community of Modoc.

From these roots, Haley Stratmeier and her grandmother Carrie Marion, Tonja’s mom, have reopened Tonja’s Toffee. The company offers almond toffee with the choice of four toppings:  milk, dark, or white chocolate, or butterscotch, as well as offering peanut brittle. The product is not just for Christmas. People order the products year-round as customer appreciation gifts or for special occasions.

“We’ve sold toffee from New Jersey to California,” Haley said. “People have been so great.”

For more information, go to www.tonjastoffee.com.

“That tastes so good, you should sell it!” Perhaps that phrase helped launch this business. We commend Haley Stratmeier, Carrie Marion, and the late Tonja Williams for making a difference by building a business from a family product. It tastes so good, I’m glad they’re selling it.

The mission of the Huck Boyd National Institute for Rural Development is to enhance rural development by helping rural people help themselves. The Kansas Profile radio series and columns are produced with assistance from the K-State Research and Extension Department of Communications News Media Services unit. A photo of Ron Wilson is available at  http://www.ksre.ksu.edu/news/sty/RonWilson.htm.  Audio and text files of Kansas Profiles are available at http://www.kansasprofile.com. For more information about the Huck Boyd Institute, interested persons can visit http://www.huckboydinstitute.org.

It's a good time to sharpen your financial skills