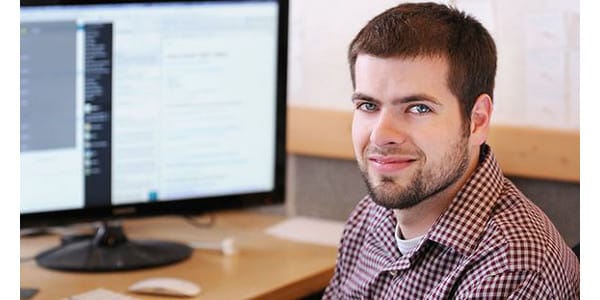 Dave Gaeddert grew up interested in computers and went on to work in coding and software development. After college, he created a business named Dropseed to offer innovative information technology tools which he developed to assist in project management, automated updating, and non-profit organization board management. (Courtesy of K-State Research and Extension)

MANHATTAN, Kan. — Drop seed. That’s what I do to plant my garden, right? When we put those words together, that is also the name of a beautiful grassy plant called prairie dropseed. Now it is the name of an innovative Kansas business. Today we’ll learn about a Kansas technology company which is designing software to help organizations work more effectively.

During the last two weeks we’ve learned about two entrepreneurial brothers, Joel and Aaron Gaeddert. There is one more brother – the youngest brother, Dave. This is the third and final profile in our series about the Gaeddert family.

Like his brothers, Dave came to Bethel College in North Newton. He worked part-time with his older brothers at Flint Hills Design while in college. After graduation, he joined the business full-time and now works as lead developer for websites and apps.

Dave was always interested in computers. He built computers of his own in middle school. By the time he got to Flint Hills Design, Dave was crafting the code which kept that company’s websites and apps operating effectively.

Dave started building internal software systems for managing multiple projects. He recognized that many of these products could have benefit for others, so he ultimately started his own side business to market these innovations.

The business is named Dropseed. The term dropseed comes from the grassy plants of the Flint Hills prairie, but could also refer to the virtual seeds of technological innovation which the company is spreading.

“Dropseed products solve problems that either I or someone close to me deals with on a daily basis,” Dave said. One of these is called PullApprove.

In information technology, a pull request is a unit of change in software development.  The PullApprove product is used in a case where multiple software specialists are working on a single project. Dave had been working on IT projects where multiple software specialists were involved, so he designed a system to help them work together better. Essentially, his product is a way of automating code review workflows.

His PullApprove system got great traction in the marketplace. According to the website, PullApprove has been used by some 500 organizations for more than a quarter-million pull requests.

Another of Dropseed’s products is called Dependencies.io. A dependency is an engineering term that refers to a situation where one piece of software relies on another one. In this case, when a project uses elements of software from multiple people, it works fine until one of those people updates his or her software. At that point, the other people need to go in and do the update also. Dave’s system automates that process, which represents a significant time saving.

A third core product of Dropseed is BoardBinder. This is a document management system, targeted to non-profit organizations. “I developed this while working with a church board,” Dave said. Over time, board members and staff would develop files and send documents back and forth to each other multiple times. BoardBinder is a software system that enables participants to share documents and schedules easily with each other.

“For smaller non-profit organizations, this is an easy and affordable way to share files and documents and saves emailing a bunch of stuff back and forth,” Dave said. The BoardBinder software allows those on a board, for example, to organize and manage documents and share schedules, including automatic reminders of upcoming meetings.  As board member terms expire, BoardBinder also makes it easy to update access and welcome new members on board.

As a software expert, Dave also does a lot of open source work. This refers to software code which is shared freely, without charge.

Dropseed is based in Dave’s home at the rural community of North Newton, population 1,759 people. Now, that’s rural.

For more information, go to www.dropseed.io.

Dropseed. It’s not just what I do to plant my garden, it’s the name of a prairie plant as well as the name of an innovative software company. We salute Dave Gaeddert for making a difference with technology and innovation. I hope these seeds of technology continue to grow.