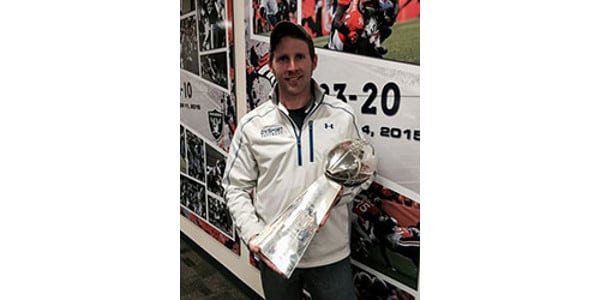 MANHATTAN, Kan. — Let’s go to Super Bowl 50. Here on the sideline we find a man from rural Kansas. He’s not blocking or tackling, but instead he’s working on an innovative software system used by NFL football teams and others. Such high-tech systems are enabling these teams to perform at the highest levels.

Billy Fogo is the young man who found himself on the field of Super Bowl 50. Billy has rural Kansas roots. His father, Glenn Fogo, was a Methodist minister who served in western Kansas before Glenn and Carol retired to Manhattan where they live today.

Billy went on to K-State and got a job as a student assistant on the K-State football staff.  His role was to shoot video of the games and practices. The video was then edited for viewing by the coaches. These compilations of clips were called cut-ups.

After graduation from K-State, he joined the football program’s video services department full time under award-winning director Scott Eilert. They worked closely with then-head football coach Bill Snyder, editing and providing him cut-ups of video clips which could be analyzed to study an opponent’s tendencies in play-calling. “(Coach Snyder) was such an amazing person to work for,” Billy said.

In those days, Billy and other staff members would be carrying briefcases filled with 40 or 50 edited VCR tapes. These recordings were copied and edited in real time. “It was extremely, painfully slow,” Billy said.

Billy met Jason Kazar, a K-State linebacker who had played in NFL Europe before returning to Manhattan as a high school teacher. Jason helped Billy connect with contacts at NFL Europe. Billy got a job using his video editing skills for the Amsterdam Admirals. After that he worked with the Omaha Nighthawks of the UFL. Billy also got married and started a family.

During this time, the industry was transitioning from manual editing to computerized editing. DVSport Software, a sports video editing software company in Pittsburg, Pennsylvania, invited Billy to join them. The company staff asked where Billy would like to live. He thought back to his days growing up in western Kansas and suggested Colorado.

“They were excited to hear that I was interested in Colorado, because they had clients out here such as the Mountain West, Big Sky Conference, and the Denver Broncos,” Billy said. Today, Billy and his wife and three daughters live in Fort Collins. He travels the country and the globe as needed, working with customers.

DVSport is a leading provider of video editing software for the NFL and other clients.  The software is primarily used for two purposes: Team tendency analysis and official replay. Various NFL teams use the DVSport software system to analyze an opponent’s tendencies in play-calling. For example, what play would their opponent tend to call on third-and-short or second-and-long?

For replays, the DVSport system has made it possible to improve and expedite those official reviews – thank goodness. “In the ACC, it was taking five or eight or ten minutes to complete a review,” Billy said.

The new system worked so well that DVSport is now the primary company on the replay market, serving all FBS and FCS schools and more. According to the DVSport website, the company’s replay system has been used in more than 400 venues, 10,000 collegiate football games, 1,500 professional games, and 15,000 collegiate basketball games.  Upon further review, that’s pretty darn good.

DVSport also provides support for the electronic tablets which viewers will see in use at all 31 NFL stadiums. “We’re now getting into the Olympic sports too,” Billy said. For more information, see www.dvsport.com.

It’s time to leave Super Bowl 50, where a young man from rural Kansas was there due to his work with this innovative video editing software company. We commend Billy Fogo and all those involved with DVSport for making a difference with technological innovation for major sports. That’s a big task for anyone to tackle.