Home / New Jersey / Now is time for farmers to assess soybeans for proper nodulation
A new user experience is coming! We'll be asking you to login to your Morning Ag Clips account March 1st to access these new features.
We can't wait to share them with you! Read more here. 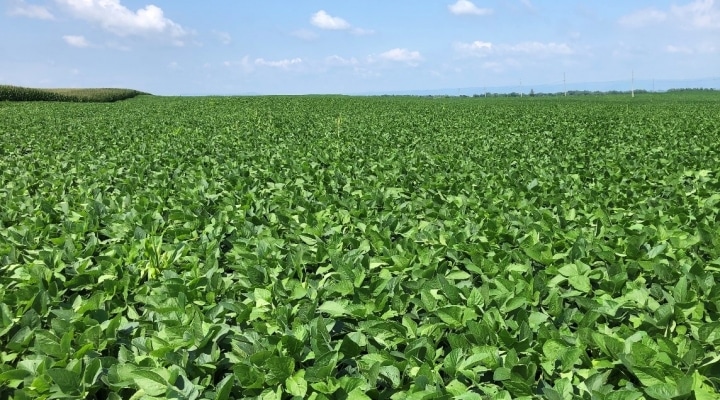 According to the most recent Census of Agriculture (2017), there are approximately 27,000 acres of soybeans planted annually in Franklin county. Currently, many of the full season soybeans around the county are flowering and entering the reproductive phase. For those of us working through small grain harvest, now is the time to plant double crop soybeans. (photo by Penn State Extension)

CHAMBERSBURG, Pa. — According to the most recent Census of Agriculture (2017), there are approximately 27,000 acres of soybeans planted annually in Franklin county. Currently, many of the full season soybeans around the county are flowering and entering the reproductive phase. For those of us working through small grain harvest, now is the time to plant double crop soybeans.

As we move forward in the growing season, we can assess our soybean nodulation to determine if nodules are present in sufficient number and are actively fixing nitrogen. Soybeans are a big user of nitrogen and need approximately 3.5 pounds of nitrogen per bushel of grain produced. So, an 80-bushel soybean crop will uptake approximately 280 pounds of nitrogen. Fortunately, if we have adequate nodulation, we don’t need to be concerned with nitrogen deficiency; nature will take care of it for us. But we do need to assess soybean fields for adequate nodulation.

About 5-6 weeks following planting of soybeans is a great time to scout plants and evaluate nodulation. At this time, nodules should be large enough to be active. When digging up plants in a field, be sure to use a shovel to ensure you are carefully removing as many roots as possible. Simply pulling out the plant will likely detach roots and you will not get an accurate nodule count. After removing the soybean plants from the soil, put them into a bucket of water to rinse the soil from the roots. At the V2 growth stage, nodules will be actively fixing nitrogen from the air

Just because nodules are present does not mean they are actively working. Nodules that are active in fixing atmospheric nitrogen will be pink or red in color when cut open. If nodules are white in color, they may be immature and have not yet begun to fix nitrogen. If most nodules are white in color early on, we would recommend visiting the field in another week to conduct another assessment. Nodules that are mushy and brown are also not fixing nitrogen. Be sure to note the location of the nodules on the plant. Nodules that form on the taproot are likely a result of inoculation from this season. Nodules on lateral roots are likely from bacteria that are existing in the soil.

A properly nodulated soybean plant should have five to seven nodules on the taproot two weeks after emergence or twelve total root nodules per inch of taproot at flowering (R1) (R. Elmore 2007). While we evaluate nodulation early in the season, the number and size should continue to increase until the R5 growth stage.

Causes of poor nodulation can include:

What can be done if your field doesn’t produce adequate nodules or if they are inactive? If fields are showing nitrogen deficiency (light green, stunted plants), we would recommend that up to 50 pounds of a dry nitrogen fertilizer source be broadcast over the field prior to full bloom (R2 growth stage).

Currently, Penn State Extension educators throughout the state are conducting research on inoculation practices. Following popular planting practices in Brazil, research there has demonstrated a 20% increase in soybean nodulation using a combination of molybdenum, cobalt, Rhizobium, and Azospirillium delivered in water at planting. We are testing these inoculation practices in multiple locations throughout Pennsylvania for a second year. Last year, a local Franklin county producer participated in an on-farm inoculation trial with full season soybeans. This year, the same producer will be replicating the trial with double crop soybeans.

This project was made possible due to grant funding from the Pennsylvania Soybean Board and the generosity of local producers. This and other project summaries can be accessed online at: https://soybeanresearchinfo.com/states/pennsylvania/.