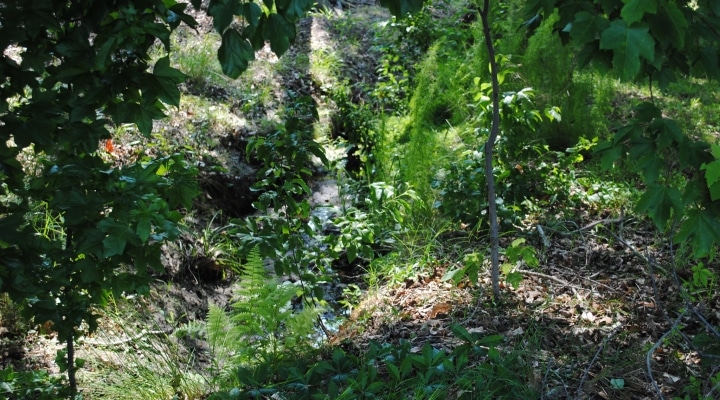 Watershedwide nutrient credit trading has been suggested as a mechanism for reducing pollution entering the Chesapeake Bay, but a new study by Penn State researchers suggests that the high cost of producing nitrogen credits through the establishment of riparian buffers on Pennsylvania farmland currently does not provide an incentive for buffer establishment. (photo by APNEP, creative commons/flickr.com)

UNIVERSITY PARK, Pa. — Watershedwide nutrient credit trading has been suggested as a mechanism for reducing pollution entering the Chesapeake Bay, but a new study by Penn State researchers suggests that the high cost of producing nitrogen credits through the establishment of riparian buffers on Pennsylvania farmland currently does not provide an incentive for buffer establishment.

“The nitrogen credit trading market was set up to help reduce pollution from point sources such as sewage treatment plants, and we wanted to see if Pennsylvania farmers could participate by getting credit for establishing riparian buffers,” said Michael Jacobson, professor of forest resources, College of Agricultural Sciences. “But it turns out that the cost of establishing and maintaining buffers is too high relative to the current credit price to work in that market.”

However, Jacobson added, increases in the market price of nitrogen credits or bundling nitrogen with other nutrient credits such as phosphorus ultimately could result in credit trading providing an adequate incentive for agricultural riparian buffer establishment.

Vegetated riparian buffers that intercept surface runoff and subsurface leaching of nutrients such as nitrogen from agricultural fields are seen as one of the best ways to improve water quality in the Chesapeake Bay watershed, Jacobson explained. To comply with federal water quality standards established to clean up the bay, hundreds of miles of new riparian buffers must be built in Pennsylvania.

Some see nutrient trading as an innovative way to incentivize riparian buffer building to restore the bay. In a nutrient trading market, sources that reduce their nutrient runoff or discharges below target levels can sell their surplus reductions or “credits” to other sources. This approach allows those who can reduce nutrients at low cost to sell credits to those facing higher-cost nutrient reduction options.

Nutrient trading, Jacobson pointed out, could allow sources of pollution such as wastewater treatment plants and municipal stormwater programs to meet their pollution targets in a cost-effective manner and could create new revenue opportunities for farmers, entrepreneurs and others who implement low-cost, pollution-reduction practices.

In the study, researchers developed a suite of 36 agricultural riparian buffer scenarios to analyze the effect of buffer characteristics on the cost of nitrogen credit production and payback periods. Scenarios were spread among five Pennsylvania counties — Blair, Centre, Cumberland, Lancaster and Tioga — to represent the range of agricultural characteristics and estimates of nitrogen loading potential to the Chesapeake Bay.

The researchers used the nitrogen credit calculation tool on the Pennsylvania Department of Environmental Protection’s nutrient credit trading website at https://bit.ly/3pAtHZV to estimate the quantity of nitrogen credits generated from these riparian buffer scenarios on Pennsylvania farmland.

In findings recently published in Agroforestry Systems, the researchers pegged the true costs of establishing buffers. Capturing the post-establishment management costs such as mowing, herbicide application and reestablishing vegetation due to mortality, they reported, brought the estimated establishment costs for riparian forest buffers to $1,770 per acre. The grass filter strip establishment cost, which included site preparation, seed costs, labor, and capital and transportation costs, was $1,280 per acre.

The researchers also estimated the revenue lost through conversion of productive farmland to riparian buffer and added that number to buffer-establishment costs. The opportunity cost of foregone corn production was calculated based on an estimate of the annual per acre corn income using inflation-adjusted total production and land ownership costs for mean corn income per acre using USDA Economic Research Service data.

At the current credit price, he noted, it would take more than 30 years of nitrogen credit trading revenue to cover establishment costs for even the least expensive riparian buffer scenario.

Patrick Boleman, who graduated with a master’s degree in forest resources, contributed to the research.

The Northeast Woody/Warm-season Biomass Consortium and the U.S. Department of Agriculture’s National Institute of Food and Agriculture partially supported this work.