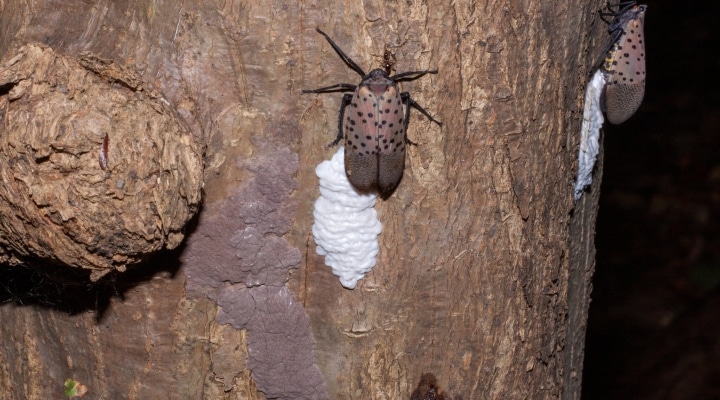 PHILADELPHIA — A new pilot training program from the University of Pennsylvania’s School of Veterinary Medicine (Penn Vet) points to a promising solution in Pennsylvania’s efforts to thwart the Spotted Lanternfly. By utilizing scent detection dogs to identify Spotted Lanternfly egg masses, Penn Vet researchers hope to proactively neutralize the destructive insects before they become a fully realized threat as a mature adult.

The launch of the training program comes at a critical time for Spotted Lanternfly management in Pennsylvania. First identified in the Commonwealth in 2014, 26 of the state’s counites have since been placed under quarantine parameters in an effort to stop the spread of the invasive species. As of August 31, 2020, there were 62,924 public reports of Spotted Lanternfly in Pennsylvania for the year – up nearly 72 percent from the same time period last year.

Beyond causing severe damage to trees and affecting quality of life for humans, the insects pose a significant threat to Pennsylvania’s agriculture industry – particularly those in the grape, apple, hops, and hardwood industries.

Each fall, Spotted Lanternfly adults lay egg masses each containing up to 50 eggs. Due to their elusive nature, these egg masses are difficult to identify, making even widespread human intervention an unreliable singular technique against the exponential nature of the species.

Instead, the pioneering study – backed by funding made available through the Pennsylvania Department of Agriculture and led by Cynthia Otto, DVM, PhD, professor of Working Dog Sciences and Sports Medicine and director of Penn Vet’s Working Dog Center – harnesses dogs’ powerful scent detection capabilities to seek out the masses so that can be properly destroyed.

“With up to 300 million smell receptors in their noses, properly trained dogs are uniquely positioned to provide an effective surveillance and management strategy in identifying and removing these egg masses that may otherwise go undetected,” said Otto.

Otto and her team began the first phase of training dogs to detect Spotted Lanternfly eggs in December 2019. Eggs were initially presented to the dogs in a laboratory setting, either scraped off tree bark or on a piece of bark removed from a tree.

“We started with eggs that were killed by freezing to -80 degrees Celsius and then tested to see whether training on these eggs would also allow dogs to recognize live eggs,” said Jennifer Essler, PhD, a postdoctoral researcher helping to lead the pilot project. “One of the most critical parts of our technique was making sure that the dogs could correctly alert from the egg mass odor and ignore the background odor of tree bark, which was surely on all of the eggs.”

Next, the dogs were asked to identify live eggs in operational conditions – on cars, pallets, hidden under things, and in other realistic environments. The results were outstanding.

“We found that after training on the dead eggs, the dogs transferred easily to the live eggs in just a couple of sessions,” said Essler. Preliminary results from the study show that the dogs correctly identified egg masses with up to 95 percent accuracy while also correctly ignoring non-target scents up to 93 percent of the time.

“These rates are averages from all of the training trials conducted during the study, so surely by the end of the trials, the dogs were performing even better,” added Essler. “And, the proof-of-concept confirming the dog’s ability to transfer easily from dead to live eggs paves the way for producing reliable training results unhindered by location or season – even during times when live targets aren’t accessible,” she said.

With a successful program established, the Penn Vet researchers are looking to the next group of trainees which includes Lucky, an 18 month old German Shepherd whose future job as the Pennsylvania Department of Agriculture’s first Spotted Lanternfly scent detection dog will be instrumental in safeguarding the state against evolving threats posed by the species.

“Penn Vet is an invaluable partner, researching innovative solutions to the most complex and challenging threats to Pennsylvania agriculture and our state’s economy,” Agriculture Secretary Russell Redding said. “We are thrilled to see the work of Dr. Otto’s team come to fruition and excited to have Lucky join the skilled team of inspectors working to keep Spotted Lanternfly from spreading.”

“This promising body of work is demonstrative of Penn Vet’s uniquely poised, multi-dimensional expertise in addressing the interdisciplinary human, animal, and environmental health needs of Pennsylvania,” said Gary Althouse, DVM, PhD, Associate Dean of Sustainable Agriculture and Veterinary Practices at Penn Vet. “And, it also reaffirms our unwavering commitment, as the state’s only veterinary school, in protecting all facets of the Commonwealth’s vibrant, vital agriculture industry.”

For more information about the Spotted Lanternfly in Pennsylvania, please visit the Pennsylvania Department of Agriculture’s resource website at agriculture.pa.gov/spottedlanternfly.