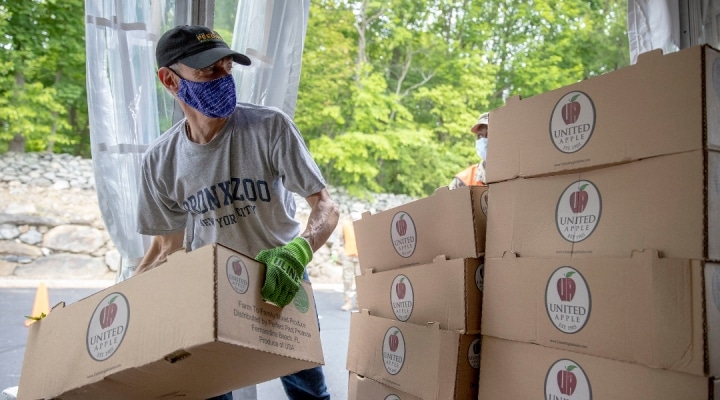 To date, food banks have purchased a total of 21 million pounds of surplus agricultural products from New York farmers and delivered to more than 1.3 million food-insecure households across the state. (New York National Guard, Flickr/Creative Commons)

ALBANY — Today, the New York State Senate passed a bill introduced by Senator Michelle Hinchey to establish Nourish New York, the state’s farm to food bank initiative, as a permanent state program through the Department of Agriculture and Markets. The pandemic-initiative, launched in April of 2020, provides funding to New York’s food banks and other emergency food providers for the direct purchase of New York-produced fruits, vegetables, and dairy products to feed those in need.

To date, food banks have purchased a total of 21 million pounds of surplus agricultural products from New York farmers and delivered to more than 1.3 million food-insecure households across the state.

“The Nourish New York program has been a silver lining in a very dark time, giving farmers the relief they needed as their markets were disrupted and providing locally grown, farm-fresh food to people facing extreme food insecurity, said Senator Michelle Hinchey. “This program epitomizes the best of New York, showing that we’re strongest when we work together to solve problems across our state, regardless of party or geography. New York is an Ag state, and strengthening our regional food supply systems benefits all of us. As Chair of the Senate Agriculture Committee, I am proud to give this great state program the permanence it deserves and thankful to Assembly sponsor, Assemblywoman Catalina Cruz (D-Queens), for her partnership.”

David Fisher, New York Farm Bureau President, said, “Nourish NY has proven to be a lifeline for people in need while supporting local farms and the food they produce. We commend Senator Hinchey for her legislation to make this a permanent program. It is a true investment into our food system by expanding market opportunities, eliminating food waste, and working to make sure no New Yorker goes hungry.”

Mark Quandt of Regional Food Bank of Northeastern New York said, “The Nourish New York program has been a godsend for food banks throughout the state and the millions of people we have served since the program was put in place in response to the COVID pandemic. It has provided an invaluable source of funds to purchase first quality New York State agricultural products, helping farmers and producers who were badly hurt by the pandemic and putting nutritious food on the table for hungry people throughout the state. We are very grateful to Senator Hinchey and the State Senate for their efforts to make Nourish New York a permanent state program. As such, it will benefit state agriculture and people in need for years to come.”

Mary Lou and Lloyd Zimmermann of Black Horse Farms in Greene County said, “We thank Senator Hinchey for her leadership on this bill to make Nourish NY a permanent state program. Last year, we supplied the Regional Food Bank of Northeastern New York with many of our freshly picked produce such as cabbage, kale, summer and winter squashes, and more. At present, we are working on a project to plant our crops to coincide with their needs for the coming season. We applaud the Nourish NY program for connecting the farmer and his seasonal products with agencies that are capable of getting our food to those in need.”

Sister Betsy Van Deusen of Catholic Charities of the Diocese of Albany said, “Catholic Charities has had the privilege, in partnership with the Regional Food Bank of Northeastern New York, of watching the Nourish NY program grow to feed literally thousands of New Yorkers at a time when so much was in question. The Nourish NY program makes sense to support our farmers to do what they do best and to feed our neighbors who are doing the best they can. The food provided is high quality, and people are learning about and being nourished by their neighborhood farmers. Everyone wins! We thank Senator Hinchey for her strong leadership and efforts to make this a permanent program.”

The Senate passed a total of seven bills today to support New York farmers and increase food access, including two additional bills sponsored by Hinchey, which include:

Other bills passed by the Senate today to support agriculture, which were co-sponsored by Hinchey, include:

–The Office of Senator Michelle Hinchey

Spring into action and be seen