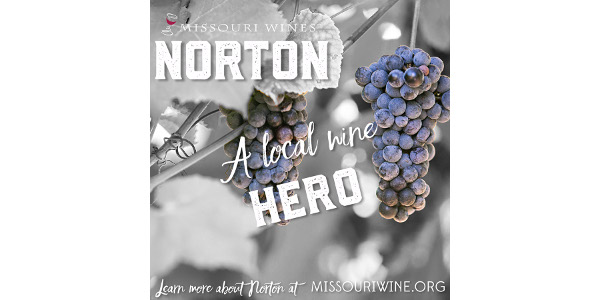 From saving the French wine industry, to putting the Missouri wine industry on the map, Norton has certainly shown heroic tendencies. (Missouri Wines)

JEFFERSON CITY, Mo. — Big, bold, and resilient… these are all appropriate descriptions of Norton, the official state grape of Missouri. They could also be used to describe a hero and in a many ways, that’s exactly what Norton is. From saving the French wine industry, to putting the Missouri wine industry on the map, Norton has certainly shown heroic tendencies. For that and several other reasons, we invite you to join us in celebrating January as Norton Month.

Norton (aka Cynthiana) is a Native American grape varietal, and is thought to be one of the oldest grape varieties still being grown commercially in the United States. So, it’s unsurprising that Norton has a bit of a legacy. In the late 1800s a louse was devastating French vineyards. Two gentlemen in Missouri discovered a way to help… this is where Norton comes in. C.V. Riley (an entomologist) and George Hussman (a scientist and vintner) realized that grafting disease-resistant Native American rootstock to the European vines would save them from the dreaded vineyard pest.

This isn’t the only time Norton made headlines. Norton wines from Missouri won gold medals at eight Worlds’ Fairs in the late 1800s, prior to prohibition. This helped word spread about the local wine industry, which was second in the nation in production at that time. Prohibition came along and decimated the industry, but it has recovered and is going strong, boasting a $1.76 billion impact annually. Norton is bringing home awards year after year, and we’re quite proud of the Norton wines we make here in the Show Me State; so much so that we named it our official state grape in 2003.

Comforting aromas of dark berries and light spices are followed by rich flavors of dark fruit and spicy oak in Missouri’s flagship wine. Norton wines are known for being big, bold, full-bodied red wines, but the grape is also used in some rosé and decadent, dessert-style wines. It’s pretty clear Norton is a fan favorite with consumers and winemakers alike as it is the most widely planted grape in the state, accounting for more than 20% of all the grapes in Missouri vineyards.

Most of the 130+ wineries you’ll discover in Missouri wine country will have at least one Norton wine for you to try. Every Norton is different, and that’s part of the beauty and adventure of exploring local wineries. Find your favorite Norton this January, and join us in raising a glass to this local wine hero. Cheers to Norton Month!