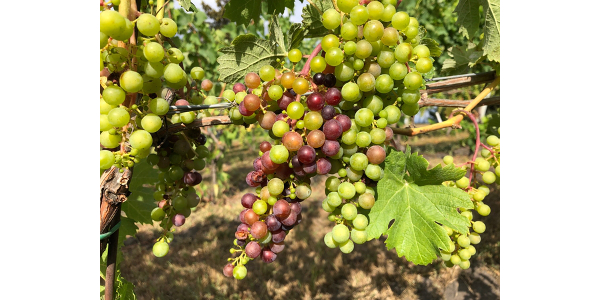 EAST LANSING, Mich. — This article is being released as an update to grape producers in northwest Michigan that, due to a relatively cool growing season, extended hang time may be required to ripen fruit for your intended winemaking goals.

According the Michigan State University’s Enviroweather system, which tracks weather and growing degree day (GDD) data for various crops, 2019 has been the coolest growing season (April 1 – Aug. 30) in Leelanau Peninsula and Old Mission Peninsula Vineyards since 2014, and is well below the five-year average (Figure 1, Tables 1-2.). However, it is possible the months of September and October will significantly add to the overall GDD for the region. In fact, in the last five years (2014-2018) there has been an average of 546 and 504 GDD accumulated during the months of September and October in Old Mission and Leelanau Peninsula, respectively (Tables 1-2).

It should be noted that although nobody is 100% certain what type of weather September and October will bring, if we add the five-year average of GDD accumulation that occurred between Sept. 1 and Oct. 31 in Old Mission and Leelanau Peninsulas to the 2019 growing season, then Old Mission Peninsula and Leelanau Peninsula will only increase to a total GDD of 2,130 and 2,209, respectively. In other words, if September and October provide relatively average heat, then vineyards will still have fewest GDD since 2014 and will have over 200 fewer GDD than the five-year average.

Growers are currently applying the finishing touches to their canopy management with second pass of leaf removal and trunk shoot thinning just in time to net the vines to protect grape clusters from birds, raccoons, etc. Growers are also busy managing the crown of the vines by training canes for trunk replacement and cane burial.

We are now well into veraison (Photos 1-3), so do NOT hedge your grapevines. Hedging (cutting shoot tips to leave rows with neat, hedge-like appearance) at this time will mobilize carbohydrates towards lateral shoot growth instead of fruit development. This season will be a race to ripen fruit before fall frost, so any practice to increase and enhance ripening is recommended.

Reports of high powdery mildew incidence in the fruit zone have been received from some growers on Old Mission and Leelanau Peninsulas. Apply full rate of the product and full cover to prevent these types of situations. In other words, use the full rate of the product and cover every single row. It is not recommended to cover alternate rows, which only puts more plant materials and fruit at risk. Full rate and full cover!