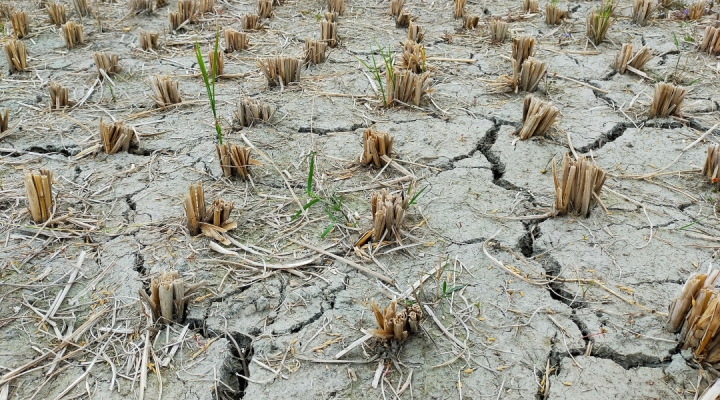 A severe drought is making lawns crispy and has farmers begging for steady rain. (Photo by Md. Hasanuzzaman Himel on Unsplash)

PROVIDENCE, R.I. (AP) — Vermont farmer Brian Kemp is used to seeing the pastures at Mountain Meadows Farm grow slower in the hot, late summer, but this year the grass is at a standstill.

That’s “very nerve-wracking” when you’re grazing 600 to 700 cattle, said Kemp, who manages an organic beef farm in Sudbury. He describes the weather lately as inconsistent and impactful, which he attributes to a changing climate.

“I don’t think there is any normal anymore,” Kemp said.

The impacts of climate change have been felt throughout the Northeastern U.S. with rising sea levels, heavy precipitation and storm surges causing flooding and coastal erosion. But this summer has brought another extreme: a severe drought that is making lawns crispy and has farmers begging for steady rain. The heavy, short rainfall brought by the occasional thunderstorm tends to run off, not soak into the ground.

Water supplies are low or dry, and many communities are restricting nonessential outdoor water use. Fire departments are combatting more brush fires and crops are growing poorly.

Providence, Rhode Island had less than half an inch of rainfall in the third driest July on record, and Boston had six-tenths of an inch in the fourth driest July on record, according to the National Weather Service office in Norton, Massachusetts. Rhode Island’s governor issued a statewide drought advisory Tuesday with recommendations to reduce water use. The north end of the Hoppin Hill Reservoir in Massachusetts is dry, forcing local water restrictions.

Officials in Maine said drought conditions really began there in 2020, with occasional improvements in areas since. In Auburn, Maine, local firefighters helped a dairy farmer fill a water tank for his cows when his well went too low in late July and temperatures hit 90. About 50 dry wells have been reported to the state since 2021, according to the state’s dry well survey.

The continuing trend toward drier summers in the Northeast can certainly be attributed to the impact of climate change, since warmer temperatures lead to greater evaporation and drying of soils, climate scientist Michael Mann said. But, he said, the dry weather can be punctuated by extreme rainfall events since a warmer atmosphere holds more moisture — when conditions are conducive to rainfall, there’s more of it in short bursts.

Mann said there’s evidence shown by his research at Penn State University that climate change is leading to a “stuck jet stream” pattern. That means huge meanders of the jet stream, or air current, get stuck in place, locking in extreme weather events that can alternately be associated with extreme heat and drought in one location and extreme rainfall in another, a pattern that has played out this summer with the heat and drought in the Northeast and extreme flooding in parts of the Midwest, Mann added.

Most of New England is experiencing drought. The U.S. Drought Monitor issued a new map Thursday that shows areas of eastern Massachusetts outside Cape Cod and much of southern and eastern Rhode Island now in extreme, instead of severe, drought.

New England has experienced severe summer droughts before, but experts say it is unusual to have droughts in fairly quick succession since 2016. Massachusetts experienced droughts in 2016, 2017, 2020, 2021 and 2022, which is very likely due to climate change, said Vandana Rao, director of water policy in Massachusetts.

“We hope this is maybe one period of peaking of drought and we get back to many more years of normal precipitation,” she said. “But it could just be the beginning of a longer trend.”

Rao and other water experts in New England expect the current drought to last for several more months.

“I think we’re probably going to be in this for a while and it’s going to take a lot,” said Ted Diers, assistant director of the New Hampshire Department of Environmental Services water division. “What we really are hoping for is a wet fall followed by a very snowy winter to really recharge the aquifers and the groundwater.”

Rhode Island’s principal forest ranger, Ben Arnold, is worried about the drought extending into the fall. That’s when people do more yardwork, burn brush, use fireplaces and spend time in the woods, increasing the risk of forest fires. The fires this summer have been relatively small, but it takes a lot of time and effort to extinguish them because they are burning into the dry ground, Arnold said.

Hay farmer Milan Adams said one of the fields he’s tilling in Exeter, Rhode Island, is powder a foot down. In prior years it rained in the spring. This year, he said, the dryness started in March, and April was so dry he was nervous about his first cut of hay.

“The height of the hay was there, but there was no volume to it. From there, we got a little bit of rain in the beginning of May that kind of shot it up,” he said. “We haven’t seen anything since.”

Farmers are fighting more than the drought — inflation is driving up the cost of everything, from diesel and equipment parts to fertilizer and pesticides, Adams added.

“It’s all through the roof right now,” he said. “This is just throwing salt on a wound.”

The yield and quality of hay is down in Vermont too, which means there won’t be as much for cows in the winter, said Vermont Agriculture Secretary Anson Tebbetts. The state has roughly 600 dairy farms, a $2 billion per year industry. Like Adams, Tebbetts said inflation is driving up prices, which will hurt the farmers who will have to buy feed.

Kemp, the president of the Champlain Valley Farmer Coalition, is thankful to have supplemental feed from last year, but he knows other farmers who don’t have land to put together a reserve and aren’t well-stocked. The coalition is trying to help farmers evolve and learn new practices. They added “climate-smart farming” to their mission statement in the spring.

Paine Farm is Maine’s Outstanding Dairy Farm of the Year