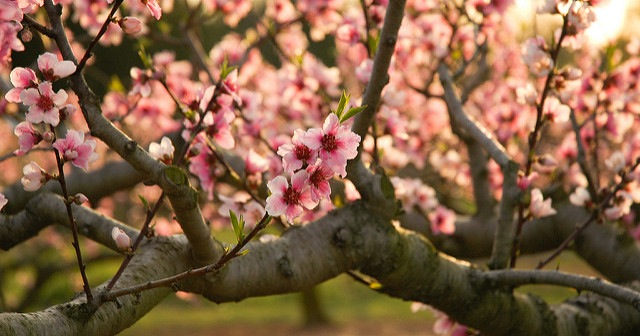 BOSTON (AP) — A year after the peach crop in the northeastern United States hit the pits, growers and agricultural experts are anticipating a healthy rebound in 2017.

Peach orchards across the region have come alive with pink blossoms, and if the weather holds out, it could be a bumper harvest.

“Everything just dialed in this year,” said Al Caggiano, co-owner of Sunny Slope Orchards, in Bridgeton, New Jersey, a third-generation family farm with about 500 acres (200 hectares) of peach trees.

First, the crops in Massachusetts, Connecticut and New York were pretty much wiped out by what growers have dubbed the Valentine’s Day Massacre, when temperatures dropped below zero in many areas on Feb. 14 — unusally cold even by normal winter standards — killing the flower buds.

“There was no peach crop in Massachusetts last year,” said Jon Clements, a fruit specialist affiliated with the University of Massachusetts Extension.

Then, New Jersey and Pennsylvania were hit by an unexpected cold spell last April.

Sunny Slope got hit by a “double whammy,” said Caggiano, who estimated that the farm’s peach harvest was down about 50 percent last year. In addition to the April cold, a localized hail storm in July further damaged the peaches.

But so far this season, the weather has aligned perfectly.

“We had a mild winter and we actually bloomed right on time the first or second week of April,” Caggiano said. “Then we had a 10-day period with no real cold temperatures during bloom.”

In Massachusetts, the 2015 peach crop was good, but last year it wasn’t even worth counting, Clements said.

Connecticut’s harvest was down 90 to 95 percent last year over 2015, according to some estimates.

This year, things are looking up.

“We just experienced a beautiful bloom, so we are anticipating a pretty decent crop,” he said, hoping to match the roughly 200,000 pounds (90,700 kilograms) he harvested in 2015.

Peaches are typically harvested starting in July and because they are the first money crop of the year, play a critical role in the financial health of any fruit grower, said John Lebeaux, commissioner of the Massachusetts Department of Agricultural Resources.

Farmers took a hard financial hit last season. For example, the crop in Massachusetts in 2015 was valued at about $3.4 million. Although final USDA numbers for 2016 aren’t out yet, UMass’ Clements estimates it was just a tiny fraction of that last year.

The failed peach crop cost Carlson Orchards tens of thousands of dollars, and insurance makes up just a fraction of that, Carlson said.

When it comes to the weather, Carlson said, “there’s a lot of ifs, ands or buts.”