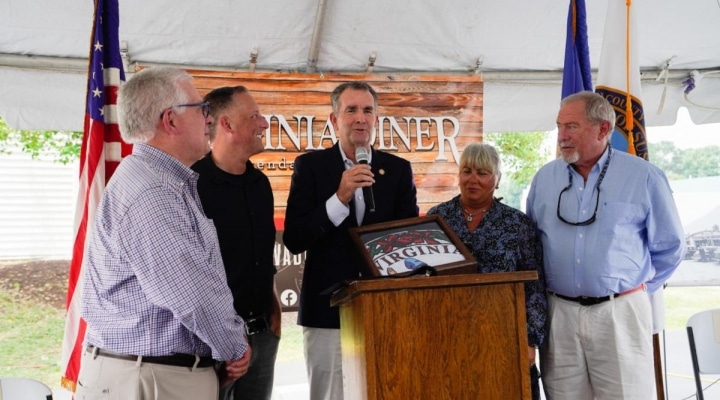 Governor Ralph Northam announced that Virginia Diner will invest over $4.5 million to nearly double production of its iconic gourmet peanuts. Founded in 1929, Virginia Diner is known for its landmark restaurant on Route 460 in Wakefield and line of gourmet seasoned peanuts, snack mixes, peanut brittles, and other candies. (photos provided)

WAKEFIELD, Va. — Governor Ralph Northam today announced that Virginia Diner will invest over $4.5 million to nearly double production of its iconic gourmet peanuts. Founded in 1929, Virginia Diner is known for its landmark restaurant on Route 460 in Wakefield and line of gourmet seasoned peanuts, snack mixes, peanut brittles, and other candies. The company currently sources Virginia-variety peanuts exclusively from Florida and as part of this expansion, will create 16 new jobs and commit to sourcing 100 percent of its peanut purchases from the Commonwealth, leading to the purchase of nearly four million pounds of peanuts from Virginia shellers over the next four years. Governor Northam celebrated the announcement with company leaders and local economic development officials during a visit to the restaurant. 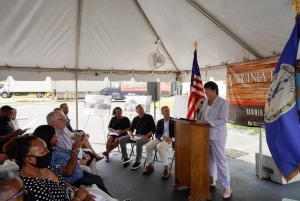 “Agriculture is Virginia’s largest industry, and that means it is vital to our economy and the well-being of our residents,” said Governor Northam. “Virginia Diner celebrates all of the culinary traditions of the Southeastern corner of our Commonwealth, most notably, Virginia peanuts. This expansion will not only bring new jobs and investment to Sussex County, but will create important new markets for Virginia peanuts and help secure the future of one of our most iconic businesses.”

Opened in 1929 in a refurbished railroad dining car, Virginia Diner soon became famous for serving patrons not the traditional after-dinner mints, but local peanuts fresh-roasted in the diner’s kitchen. By the late 1940s, customer demand for their famous peanuts led to the creation of a small mail order business. Today, Virginia Diner’s gourmet peanut business accounts for more than 80 percent of the company’s annual sales, with half their sales going through major retailers with the remainder direct to customers through the company’s mail order catalogs and website.

“Peanuts have been an iconic part of the Commonwealth’s agricultural history since we became the first state in the country to begin commercial peanut production nearly 200 years ago,” said Secretary of Agriculture and Forestry Bettina Ring. “Thanks to companies like Virginia Diner, the Commonwealth’s reputation as a producer of the world’s best peanuts continues to thrive. I’m thrilled that we could partner with Sussex County through the Agriculture and Forestry Industries Development Fund to support this cornerstone of Virginia agriculture.”

“Virginia Diner has been an icon throughout Virginia and the Mid-Atlantic region for 92 years in large part due to the support of our local Wakefield community, regular customers throughout Sussex and surrounding counties, and families who have been visiting for several generations,” said Virginia Diner President and COO Andrew Whisler. “We are thankful for the support of the Commonwealth of Virginia and Sussex County as we embark in a multi-year, multi-phase investment to bring more jobs, revenue, and agricultural purchases to the region.”

The planned expansion is expected to occur in two phases over the next four years. The first phase includes construction of a 22,000 square-foot addition to the existing building for warehousing, distribution, and office space. This new facility will also enable the company to store all of its products on-site. The second phase of the project is an expansion of Virginia Diner’s manufacturing facility, which will increase the company’s production capacity, improve operational efficiencies, and decrease costs, thereby improving product margins. Virginia Diner roasts an average of 4,200 pounds of peanuts per day, scaling up to more than 7,000 pounds per day during peak holiday season.

“Virginia Diner’s commitment to sourcing their peanuts from the Commonwealth is something to celebrate, not just for our state’s progressive economy but for Sussex County as a whole,” said Senator Louise Lucas. “A few weeks ago, Virginia was named the nation’s top state for business by CNBC. Today, we are proud to continue to uphold that standard by celebrating this economic development announcement in Sussex County, one of the rural parts of my district.”

“Virginia Diner is known for its delicious peanut products all over the country,” said Delegate Roslyn Tyler. “As a member of the House Appropriations Committee, I am pleased to work with Governor Northam, Secretary Ring, and state agencies to fund small businesses and create job opportunities that are vital to the economy of rural communities like Sussex County. We must continue to move Virginia forward and we can’t turn back.”

“For nearly 100 years, Virginia Diner has been a fixture of Sussex County’s business community and this expansion project is evidence of their continued long-term commitment to our county,” said Sussex County Board of Supervisors Chairwoman Susan Seward. “In addition, this project will further promote our strong agricultural heritage and provide opportunities for our peanut growers. We appreciate the support of the state and look forward to working with Virginia Diner on this expansion.”

“We are delighted that Virginia Diner has made the decision to continue to grow and prosper in the Gateway Region,” said Keith Boswell, President and CEO of Virginia’s Gateway Region Economic Development Organization. “We look forward to continuing our strong partnership with the company and celebrating this next chapter of their growth for Sussex County.”