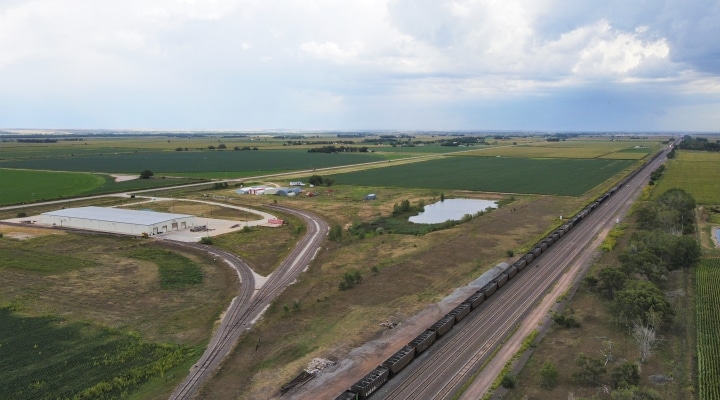 The 300-acre industrial rail park is located eight miles west of North Platte, near Hershey. Over three years of planning with Union Pacific Railroad, the Nebraska Legislature, Lincoln County Commissioners, the Village of Hershey, the City of North Platte, Greenbrier Rail Services, various utility partners and local landowners has positioned the project to move forward. A major feasibility study to attract a soybean oil crush facility earned a platinum rating on its viability.

The Chamber has acquired options to purchase the land for the rail park site and successfully secured a $30 million grant through the Rural Projects Act from the State of Nebraska. Access to the main line has been granted by Union Pacific for use by the park. A Phase 1 environmental assessment has been conducted on the entire park site with no significant findings. The park development will qualify for Tax Increment Financing (TIF) and will be developed in stages, with an estimated $60 million in infrastructure development to be done by the Chamber after an anchor partner is chosen, with the overall rail and utility infrastructure designed for the needs of the anchor partner. The Chamber acknowledges the best anchor partner is most likely an agricultural processor, sought guidance from the Nebraska Soybean Board (NSB), and subsequently contracted with RLA Consulting Group, an internationally experienced team of former executives with substantial soybean processing experience, to complete an extensive feasibility study on locating a 3,000 metric ton per day soybean processing plant at the park.

An excerpt from the study states “RLA Consulting’s investigations confirm a great opportunity and limited risk for locating a 3,000 metric ton per day soybean crushing plant in North Platte, Nebraska. The proposed site is in Western Nebraska and has access to sufficient soybean production there and from Northwestern Kansas to support the plant.”

The study indicates “Preliminary findings indicate that a capital investment of $285 million provides a pre-tax 18.8% ROI” and continues with “Overall, North Platte appears to be in an enviable and dominant position with a regional strategic location and flexible transportation connections.”

The surging, policy driven, demand for Renewable Diesel (RD), with soybean oil being the primary domestic feedstock, is bringing soybean processors in partnership with the liquid fuels industry to expand soybean processing on a large, national scale. The study highlights “The Renewable Diesel industry’s demand for soybean oil has the potential to be one of the biggest demand side drivers since the rise of demand for corn to produce ethanol during 2005-2010”, and notes “most RD plants are located in the US Gulf States and Western U.S. and are principally serviced by rail and barge logistics.” “North Platte would benefit from the standpoint of its transportation proximity to these markets… With the adoption of the RD policy in California and the petroleum industry’s rush to build out the refining infrastructure we no longer consider soybean oil demand to be a concern and it is in fact now a considerable benefit for the economics of the proposed plant site given its proximity to the California market.”

“The soybean processing industry is experiencing tremendous growth across Nebraska and the Midwest,” said Doug Saathoff, farmer and NSB chairman. “Global and domestic demand for sustainably grown soybean meal and oil continues to grow and we are excited to discover and help research new value-added opportunities right here in Nebraska.”

The proposed 3,000 metric ton plant would process over 36 million bushels of soybeans annually.  Regarding supply, the study shows “Using the soybean production average for the 2017-2021 crop years indicates the North Platte location should have access to “captive” volume of approximately 21.9 million bushels annually. The word “captive” is used in the sense that there are no competing soybean plants which are closer than the … proposed North Platte location.” Analyzing Nebraska’s three most western Crop Reporting Districts, and applying calculations from when other new soybean plants were built, the study concludes acreage expansion “theoretically increase the soybean production total for the three districts from 20 million in Year 1 to 46 million bushels by Year 5.”

Marketing soybean meal locally, the study suggests “a North Platte crushing plant could have access to up to an estimated 665,000 tons of soybean meal demand annually, or approximately 78% of the plant’s meal production.”, and utilizing Union Pacific rail expands to “North Platte is well-located to supply several regional soybean meal markets. These would include the PNW as well as the Western and Southwestern U.S.”

The Chamber is now soliciting proposals from parties interested in developing a soybean processing plant in the new rail park. To review the rail park site, access the full feasibility and economic study, and submit proposals; contact Gary Person, President and CEO, North Platte Area Chamber & Development at 308-532-4966 or gary@nparea.com.