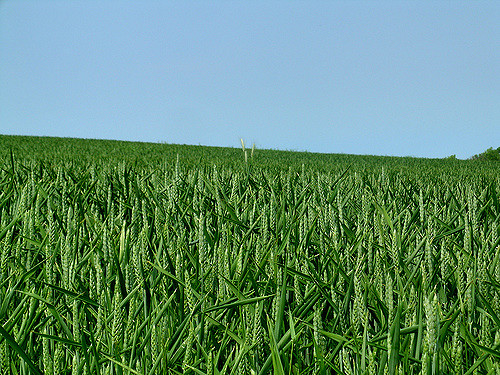 MANDAN, N.D. — The 2021 U.S. spring wheat harvest is wrapping up.  While moisture received over the past couple of weeks was welcome, it has delayed harvest in the last portion of the crop.  Nationwide, nearly 90 percent has been harvested, well ahead of the average pace of 71 percent.  Much of the remaining harvest is in North Dakota and Montana where about 15-20 percent is left to harvest. Yield reports remain the same with some being as low as 10 bushels per acre or less and some as high as 50-60 bushels per acre, with the overall average still expected to be well below normal levels.  The level of abandoned acreage will also be much higher than normal, although the exact level is not yet known.

Quality of the crop remains high in terms of grading and kernel characteristics.  Nearly two-thirds of the expected spring wheat samples have been analyzed at the NDSU Wheat Quality Lab.  This week’s quality data is little changed from the previous week.  Protein is averaging nearly a percent higher than last year at 15.3 percent (12 percent moisture basis) and average test weight is similar to the 2020 crop at 61.7 pounds per bushel (81.1 kg/hl).  There are some samples and producer reports of lighter test weights in areas.  Falling number values are high, averaging 432 seconds.  Vitreous kernel content is averaging 87 percent, producing a current grade of No. 1 Dark Northern Spring.

Harvest of the North Dakota durum crop is now three-fourths complete.  Quality analysis has begun on the 2021 Regional Durum Crop Quality samples and the first portion of the crop is showing high protein, good color and slightly lower test weights compared to last year.  Only about a fourth of the samples have been collected and analyzed, so quality data will change from week to week. So far, the protein average is 15.9 percent (12 percent moisture basis), two percentage points higher than average.  Thousand kernel weights are lower than last year with the average at 39.7 grams and test weights are also slightly lower at 59.9 pounds per bushel (78.0 kg/hl).  Falling numbers so far have been high, averaging over 400 seconds and total defects are higher than a year ago at 1.6 percent due to a higher amount of shrunken and broken kernels.  Vitreous kernel content is averaging over 90 percent, with the crop grading a No. 2 Hard Amber Durum so far.  Rain over the past couple of weeks has delayed harvest for some producers and has likely affected some quality factors such as color and test weight.