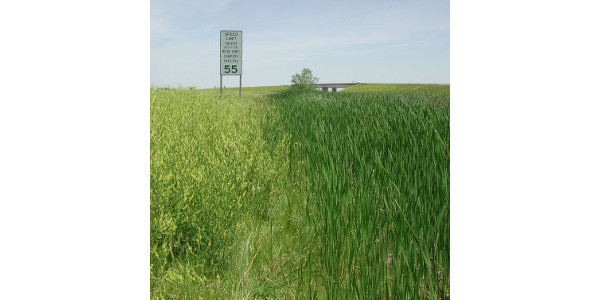 URBANA, Ill. — The wetlands in and around Chicago are overwhelmingly invaded by non-native plants, according to a new study by University of Illinois researchers. The study, which pulls together species occurrence data from over 2,000 wetlands in the urban region, is the first to describe wetland invasion patterns on such a large scale in the Chicagoland area.

The data came from a decade’s worth of environmental assessments, a required step in any new road or building construction project. Normally, once these assessments are submitted to regulatory agencies, they’re filed away and rarely seen again. But the U of I researchers suspected that, together, the assessments contained a goldmine of information.

“For us, it was a shame that all of these data are available and are not being used to answer some large questions about the state of natural communities across the region. Compiling them into a large regional data set allowed us to answer questions at a large scale that hadn’t been addressed before,” says Jeff Matthews, assistant professor in the Department of Natural Resources and Environmental Sciences at U of I, and co-author on the study.

The main question had to do with the degree of invasion by non-native plants in Chicagoland wetlands. And the answer was staggering.

“We have worked in the Chicago region long enough that we thought we knew the extent of the problem. But even having that past experience and knowing that invasive species are pervasive, the numbers were still shocking to me,” Matthews says.

Non-native plant species were present in over 99 percent of the wetlands in the data set, and, on average, non-natives made up over a third of the species present in individual wetlands. One species in particular, reed canary grass, was nearly ubiquitous: it was found in some 74 percent of the surveyed sites.

Being non-native is not necessarily a bad thing – many of our most important crops are non-native – but when non-native species thrive and steal space and nutrients from native plants, that’s a problem. And with a third or more of the native species being replaced by non-natives, ecosystems can be inextricably altered.

“We saw a recurrence of certain groups of non-native species that are associated with major roads,” Matthews says. “We assume this linked to road salt, because most of the species in these recurring groups are highly tolerant of salt; they’re actually maritime species that have moved in from the coast. We’re seeing the same collection of species throughout the Chicago region along the tollways and major interstates.”

Invasions can happen anywhere that aggressive non-native species are introduced, but the researchers say urban centers like the metropolitan Chicago area are at greater risk.

“Urbanization can lead to loss or extirpation of species entirely from a region, through habitat loss and pressure from non-native species,” says Dennis Skultety, a GIS/GPS specialist with the Illinois Natural History Survey at U of I, and the lead author on the study. “Urban areas are an introduction point for non-native species, whether they’re coming in through commerce as hitchhikers on trucks or ships, or are intentionally introduced through the horticultural industry or pet trade.”

Although the overall picture looks bleak, Matthews says even invaded wetlands have value. “These wetlands still provide flood water storage, improve water flowing through those sites, and provide wildlife habitat to some extent.”

Skultety says that a practical lesson from the work is to redefine what is achievable for wetland restoration in urban areas. “We should focus more on the functional values that wetlands provide, and not necessarily get hung up on a single metric of vegetation quality.”

The article, “Human land use as a driver of plant community composition in wetlands of the Chicago metropolitan region,” is published in Urban Ecosystems.

Day of the Horse