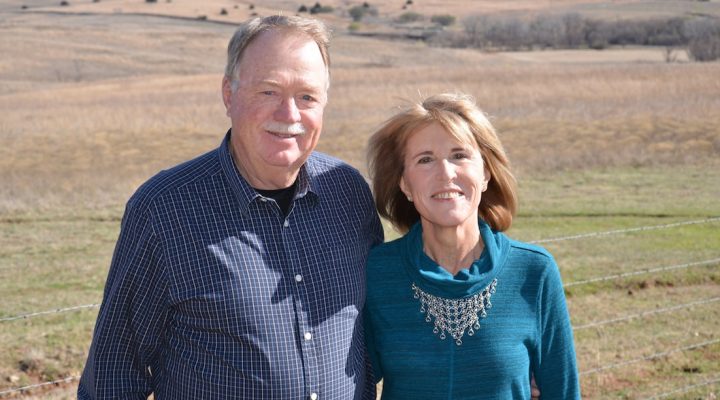 Dr. Clint Roush, the 2016 winner of the Governor’s Outstanding Achievement Award in Agriculture, and wife Pam Steiner Roush are shown at their home near Arapaho. (Courtesy Photo)

OKLAHOMA CITY — Oklahoma has a rich agricultural history thanks to dedicated farmers. In 1998, the Governor’s Outstanding Achievement Award in Agriculture was created to recognize those who have helped lead the industry while demonstrating exemplary personal values and pursuing agricultural achievements in Oklahoma. Through Feb. 10, the Oklahoma Department of Agriculture, Food and Forestry (ODAFF) is accepting nominations for a total of four Oklahoma Excellence in Agriculture Awards.

The award winners will be announced at a recognition ceremony on March 29, 2017 at the state capitol as part of the state’s annual Oklahoma Ag Day celebration.

Examples of eligible agriculture enterprises for the Governor’s Outstanding Achievement Award in Agriculture nominee are: livestock and crop production, agribusiness, forestry, horticulture and nursery management. In addition to considering the nominee’s production agriculture involvement, the application also recognizes leadership in agricultural and state organizations as well as additional awards and honors. The winner will be someone with at least 25 years in agriculture who derives the bulk of his or her income from agriculture or has retired from an agricultural enterprise.

Previous award-winners have represented different areas of Oklahoma as well as a variety of agricultural groups and commodities. Past recipients have guided their families and communities to success by excelling as dairymen, cattle ranchers, pork producers, wheat farmers, conservationists and educators. Uniting previous Hall of Fame inductees is their service to their communities in addition to their contribution to the agriculture industry.

“The Oklahoma Excellence in Agriculture Awards give us the opportunity to recognize those individuals who have made a positive and lasting impact on agriculture in our state,” said Oklahoma Secretary of Agriculture Jim Reese.

The deadline for all nominations is 5 p.m., Friday, Feb. 10. The recipients will be selected by a committee of representatives from agricultural commodity organizations and farm and ranch organizations. Any questions regarding the nomination procedure or completion of the official nomination form can be directed to Jason Harvey at(405) 606-1477. The nomination forms can be found at www.ag.ok.gov/odaff-halloffame.htm .

Previous recipients of the Outstanding Legacy in Agriculture Award

Previous recipients of the Outstanding Public Service in Agriculture Award

National Dairy Month around the corner
May 29, 2020

Tammy Will named Ag in the Classroom Teacher of the Year
March 10, 2020