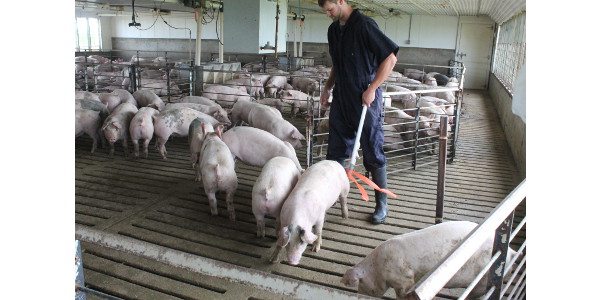 Photo taken on the farm of Craig Andersen of Centerville, South Dakota during the 2016 America's Pig Farmer of the Year contest. (CREDIT: Courtesy of National Pork Board and the Pork Checkoff. Des Moines, IA USA. https://creativecommons.org/licenses/by-nc-nd/2.0/)

DES MOINES, Iowa — The National Pork Board is accepting nominations for its 2019 America’s Pig Farmer of the Year award through Sunday, March 10, at americaspigfarmer.com. The award recognizes a U.S. pork producer who demonstrates excellence in raising pigs using the We CareSM ethical principles and by sharing his or her story with the public.

“Like most pig farmers, I’m most comfortable in the barn,” said Patrick Bane, a pig farmer from Illinois and America’s Pig Farmer of the Year. “However, my passion for pig farming is why I decided to be involved in this program. It allows me to help more people understand the story of modern agriculture.”

Bane has participated in several events since being named America’s Pig Farmer of the Year in October. This has included attending the fall meeting of the Pork Checkoff’s Retail Advisory Council, networking with Chicago-based food influencers and speaking at the Humane Table congressional briefing in Washington, D.C. The latter event was hosted by American Humane, one of the oldest animal welfare organizations in the country.

A panel of third-party judges will help determine the final award recipient, with the winner announced during national pork month this October. The public also can play a role in selecting the 2019 winner by viewing short clips of the finalists on their farms at americaspigfarmer.com, and voting for their favorite through the Pork Checkoff’s social media outlets.

Anyone can nominate a U.S. pork producer or themselves at americaspigfarmer.com/nominate. Candidates must be at least 30 years old as of Jan. 1, 2019. Complete rules of the award program are on the site as well, along with answers to frequently asked questions.